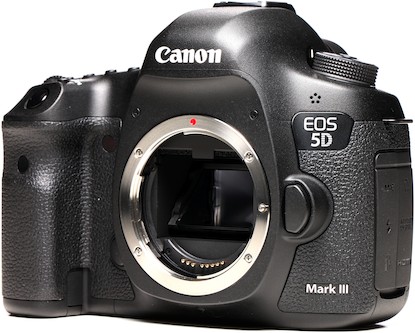 Although there is a week left until Black Friday, the best day for shopping, great deals are starting to surface already. For example, the Canon 5D Mark III Digital SLR Camera just got a $300 price cut on Amazon.com, now being available for $2499. Although this is still a huge amount of money, the price cut will save you 11% of the original price of the camera. If you would like to purchase it, now is the time to do it because the prices probably won’t get any lower in the near future.

The Canon 5D Mark III is a totally improved version of its predecessor, the Mark II. Although they share the same name, the Mark III is essentially a whole new model since every major system of the camera was upgraded and updated  in comparison with the Mark II. This SLR camera has a body that is based on the design of the EOS 7D, and it has a 61-point AF system that is borrowed from the flagship device of Canon’s, the EOS-1D X. All these borrowed and copied features come together in creating a great camera.

Among other features, the Mark III includes a 150,000-cycle shutter rating, an enhanced HDR mode, and it can record 1080p videos at, 25, and 30 frames per second. It also has a full HD resolution and a 3.2- inch, 1.04M-dot LCD display. The new CMOS sensor featured by the Canon 5D Mark III is more sensitive than the previous version and the eight-channel readout allows a 6-frame-per-second frame rate. The camera also offers a 100% viewfinder coverage, which is also a great feature. The Mark III’s Quick Control dial includes touch capability and allows users to silently perform adjustments while in video mode.

All in all, the Canon 5D Mark III is a good camera, even if not the best on the market. Still, it is a good option in its price range, and now that you have the possibility to save $300 when ordering it from Amazon.com, it just got a little more appealing. If you purchase the camera before January 9, 2016, you will also get 13 months of damage protection from Canon.

I have always been eager to try out any gadget I could get my hands on. I became a tech journalist so that I could always be around technology and see the newest devices. I use gadgets every day to make my work and life easier. I have enough experience to know If a device is actually improving my activity, offers something useful or new. I will post my honest opinions and judge a device as objectively as I can.
@https://twitter.com/Colin27Anderson
Previous Ulefone Be Touch 3 – a great mid range smartphone
Next Top 10 Best iPhone 6 and iPhone 6S cases in November