This year we got to witness the launch of a great number of gadgets, including smartphones, wearables, laptops, tablets, and cameras. Although we paid a little more attention to the handsets and wearables that were released this year, the laptops didn’t go by unseen either. All the major manufacturers delivered improved versions of their flagship devices, or totally new, innovative devices that are meant to make our lives easier and more fun. Two of these devices are the Macbook Air, 2015 edition and the Yoga 900. They both have the same size, so we thought we should check them out to see which one could be the perfect laptop for you. 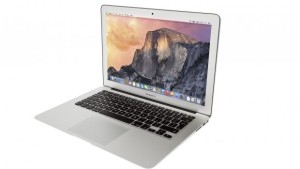 The Cupertino, California-based company released its latest version of the MacBook Air in March, so it is possible to see its new version in a few months. Even though there weren’t any changes made design- wise compared to the previous versions, the 2015 MacBook Air is still quite appealing with all- aluminum, thin and light- weight body and its simple but still elegant lines. Unfortunately, while the outside of the laptop still looks all right, despite the lack of improvements in the past years, the inside is quite disappointing.  When you unfold the device, the thick bezels around the 13.3- inch display of the Macbook Air will just smash you, especially since there are so many laptops out there that offer a bezel- less display. The 1,440 x 900 pixel resolution of the display is also quite unusual in times when the resolution of low- cost laptops starts from 1080p and it goes up to 4K with the high- end ones.

Even though the 2015 edition of the MacBook Air looks a lot like its predecessor, it is an improved version of the previous model. The new version is powered by a 5th-generation Intel Core i5-5250U processor and it includes a new Intel HD Graphics 6000 GPU. It also features dual display and video mirroring now, meaning that it simultaneously supports a full native resolution on the built-in display and up to 3840 by 2160 pixels on an external display. Another novelty of the 2015 edition of the Apple laptop is that it’s now equipped with a new Thunderbolt 2 port, two USB 3.0 ports, and an SD card slot, connecting to other devices being easier than ever.

Although the new version of Apple’s light- weight laptop was improved in many ways, the great battery feature is a constant one. The built‑in 54‑watt‑hour lithium polymer battery is able to last for up to 14 hours of web surfing, which is quite impressive, especially for such a thin device. The MacBook Air also impresses with its storage and memory. The laptop comes in two versions, one of them offers 128 GB of internal storage while the other one includes 256 GB PCIe-based flash storage. The laptop’s memory also comes in two variants, 4GB or 8GB. Although it’s not necessarily an impressive feature, it is more than decent, so we’ll look at the memory and storage of the Apple laptop as pros instead of cons. 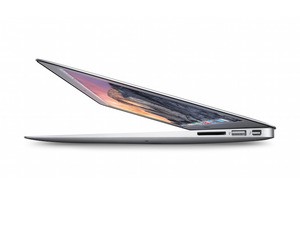 The 2015 MacBook Air is not the best we’ve ever seen on the laptop market, but to be honest, it doesn’t really have to be in order for people to buy it. Many customers simply prefer the looks of this laptop and they are ready to compromise on the resolution for example in order to get it. If you don’t want to watch videos on it, and you only want a laptop for work, it could be a good one for you.

The Yoga 900 is another laptop that didn’t get a major overhaul in design compared to its predecessor, but it is still a majorly improved version of the previous version. The Lenovo Yoga 900 is the improved version of the Yoga Pro 3. The signature “watchband” hinge is present in the Yoga 900 also, and it allows users to bend the Lenovo Yoga 900 in different directions, exactly the way they could with the Yoga Pro 3. The Lenovo Yoga can be used as a laptop, as a tablet or in the tent- mode. The Continuum feature offered by Windows 10 will now make it even easier and smoother to switch between the modes offered by this convertible laptop. The 13.3- inch display of the Lenovo ultrabook has a quad- HD resolution, which is definitely better than the one featured by the previously presented laptop. The display is clear and is perfect for watching movies, unlike the Apple laptop, with its lot lower resolution.

The Lenovo Yoga 900 is powered by sixth generation Intel Core i5 and Core i7 processors. These will make the Lenovo Yoga 900 more powerful and faster not only than its predecessor but also than the MacBook we’ve presented. The Lenovo Yoga 900 includes up to 16 GB LP-DDR3L and is available with up to 512 GB SSD storage. Less powerful version come with 8 GB RAM and 256 GB internal storage.  This means that even the lower spec sheet is more impressive than the highest version of the Apple device. The Lenovo Yoga 900 also offers impressive connectivity due to its numerous ports. It comes with two USB 3.0 ports, a Type C 3.0 port  with video out, a DC-in with USB 2.0 function, a 4- in- 1 card reader and an audio combo jack. 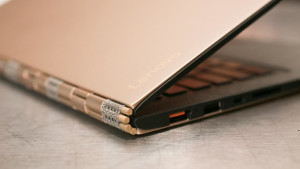 The battery of the Lenovo yoga 900 is a 4 Cell 66 Watt Hour Li-Polymer one. This is supposed to ensure up to 9 hours of battery life, at least without being connected to Wi- Fi and with a reduced display brightness. When normally used it will definitely last for a shorter period of time. Actually, it probably ensures around 5 hours of battery life on a charge, which is a lot lower than the battery of the MacBook.

All in all the Lenovo Yoga 900 is a great 2-in-1 laptop, it looks great and it has an impressive spec sheet. It is definitely an improved version of the Yoga Pro 3, and it is a better laptop than many of the ones from its price range. It is the perfect device to carry around, even if it isn’t the perfect laptop ever made.

Given the fact that the MacBook Air is not a convertible device, but the Lenovo Yoga 900 is, we will try not to focus on this feature when deciding which laptop is better. If we look at the processors, the Lenovo Yoga clearly has an advantage over the other laptop, given the fact that it is equipped with a newer generation processor. The display of the Yoga 900 is clearly a lot better than the one of the Apple laptop,  so if watching movies on your laptop is important for you, the Yoga is the one for you out of these two. However, for the most of us the battery life is just as important as the design and the display of our computers, and in this category the MacBook is definitely the winner. It is a highly reliable device, so if battery life and smooth functioning are important for you, above the clarity of the images, the MacBook should be your choice. The prices also tip the scale toward the MacBook. While the price of the Yoga 900 starts at $1199, you can purchase an Apple MacBook starting from $999.

If we take into consideration the overall image of the laptops, the  MacBook Air seems to be the winner. It doesn’t have a complicated design, like the Lenovo, it’s not a convertible, but it has a good processor and a great battery life.

I have always been eager to try out any gadget I could get my hands on. I became a tech journalist so that I could always be around technology and see the newest devices. I use gadgets every day to make my work and life easier. I have enough experience to know If a device is actually improving my activity, offers something useful or new. I will post my honest opinions and judge a device as objectively as I can.
@https://twitter.com/Colin27Anderson
Previous OZO, the VR camera, is Nokia’s hardware comeback
Next Apple Watch vs. Samsung Gear S2 – Software over battery life 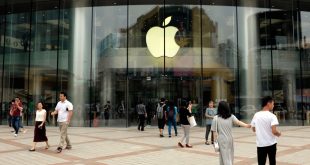 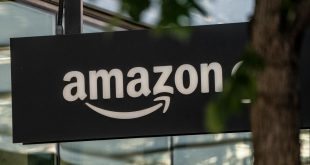 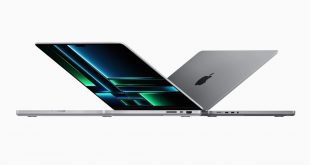