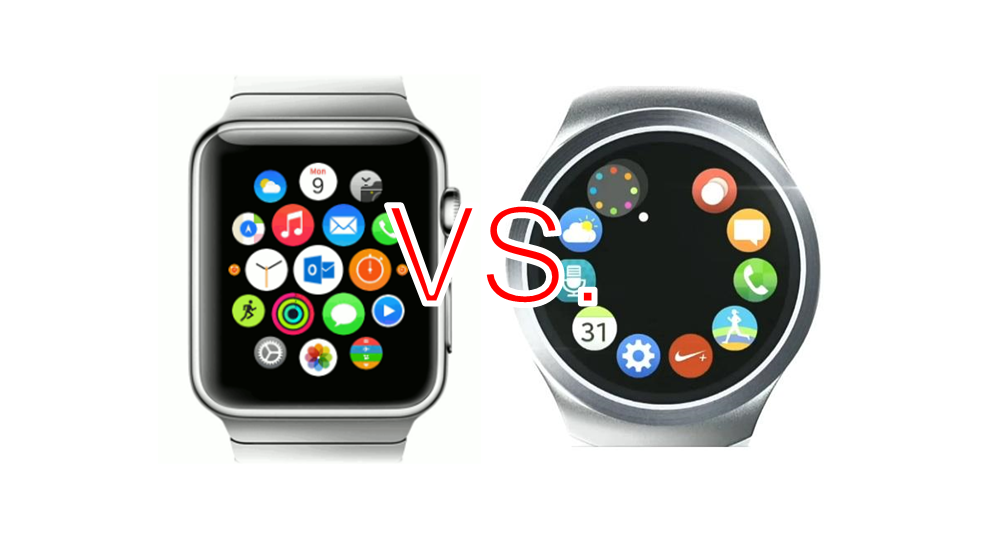 Wearable gadgets seem to gain more and more interest from customers, even if we still didn’t get to a point where the majority of people own one. This year a number of new smartwatches were released, including the Apple Watch and Samsung’s second generation Gear wearable. While the Apple Watch was released in April, and so far it managed to gain quite a few fans, the Gear S2 was only released in October. Even so, it seems that this smartwatch was also well received, so we decided to take a look at them and try to figure out which one is the better device.

The Apple Watch is one of the most popular wearable gadgets out there. With the update of its software, the Watch OS 2, it got even more popular, making it really hard to beat. The rectangular watch might not be everyone’s cup of tea, but we have to admit that besides the great watch faces it has to offer, there are almost endless possibilities to personalize this watch due to the materials it is made of and the great variety of straps users can opt for. Of course, all these possibilities imply extra costs also, so if you don’t want or can’t afford to spend a lot of money on your smartwatch, the Apple Watch might not be the perfect device of this kind for you.

Apple’s smartwatch comes in two size: a 38mm version and a 42mm version are available for purchase. The watch’s casings come in three versions: an aluminum one, stainless steel, and 18 karat gold casings are also available. The great variety of casings and straps practically gives customers the possibility to create exactly the watch they wished for, having a lot of combinations to choose from. One aspect that differentiates the Apple Watch from other smartwatches is its display. It has a Force Touch display which is unique at this point, and the clarity of the display is also quite impressive with its 326 ppi pixel density. This is quite hard to beat, to be honest.

The digital crown feature of the Watch allows users to scroll through menus and settings easily. Speaking of menus and settings, the Apple Watch doesn’t only allow users to remotely control the smartphones they pair the wearable to, it also has a number of fitness features that are meant to take care of your health. These features include a heart- rate monitor, a pedometer, and a sedentary reminder, all of which work perfectly. The Watch offers voice control also through Siri, allowing users to dictate text messages and run searches on your devices, you can do it with the help of the voice control. You can even set reminders on your Apple wearable.

The Apple Watch is quite powerful with its S1 processor, 512 MB of RAM and 8 GB internal storage, allowing the device to perform smoothly and fast. As it can be expected, the Apple Wach only works with iOS devices, it’s not compatible with Android smartphones. The battery of the Watch isn’t the highest- capacity we’ve ever seen, but the 205 mAh battery will safely get you through the day. In fact, it is said to ensure about a day and a half of normal use. Now you also have the Magnetic Charging Dock, so charging your smartwatch won’t be a difficult thing to do. Even more, when charging your smartwatch you can use it as an alarm clock in Nightstand mode.

The price of the Apple Watch starts from $349, but it can get a lot higher, depending on the casing and strap of your choosing. 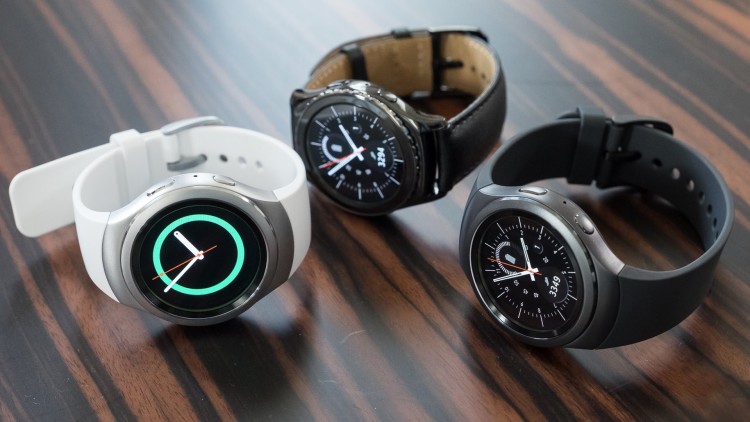 Although the pixel count on the Gear S2 is higher than the one on the Apple device, the pixel density is lower, so the images won’t be as accurate as the ones delivered by the Apple wearable. Even so, the 360 x 360 resolution and the 302 ppi pixel density will deliver a good- quality image. The watch faces of the Gear S2 are not as many and not as impressive as the ones of the Apple Watch, but if you want to have a smartwatch for its functions, not its looks, this shouldn’t be a problem.

One thing that is really great about the Samsung wearable is its rotating bezel that allows users to scroll through features and settings more easily. The rotating bezels enable both vertical and horizontal scrolling, which is not possible on the Apple Watch. Just like the Apple wearable, the Gear S2 has a number of fitness features, including a heart rate sensor, a pedometer, and a sedentary reminder. According to some reports, the sedentary reminder is not as efficient on the Gear S2 as on the Apple device.

The Gear S2 can also be controlled by voice, due to the S Voice feature, for texting, searching and other functions. What is different with the Gear S2 is that it’s not necessary to use voice command for texting, it also allow users to input their messages via the keyboard that appears on the display of the Gear S2. Unfortunately, the Gear S2 doesn’t allow users to set reminders on their smartwatches, so this is a feature the Apple device has, but the Samsung one lacks.

The dual- core processor of the Gear S2 combined with the 512 MB of RAM and 4 GB of internal memory turn the smartwatch into a quite powerful one, even if it doesn’t have the storage space of the Apple device. The battery of the Gear S2 is higher- capacity than the one featured by the Apple smartwatch. The 250 mAh is able to ensure about two full days of use, which is longer than the battery life of the Apple gadget. What makes the Gear S2 different from the Apple Watch is that it doesn’t only work when paired to a smartphone. The 3G version of the watch has its own SIM card slot, making it possible to be used as a phone, without being connected to one.

The price of the Samsung Gear S2 starts from $299, making it more affordable than the Apple Watch. Due to the fact that there aren’t as many combinations of straps and other features, the Gear S2’s price will definitely not go as high es the Apple Watch’s which can get up to $17.000 for some combinations of features.

The Watch OS 2, the great variety of watch faces, casings, and straps, in other words, the fact that it is highly customizable, makes the Apple Watch the preferred smartwatch by many of the customers. However, the Gear S2 is a lot more affordable and has a better battery life, making it more reliable. It is a tough choice to make, between the two. If the price isn’t an issue, the Apple watch seems to be the one that has more to offer, both in design and quality. On the other hand, if you can’t afford to invest a lot of money in a smartwatch and the basic version is not the one for you, the Gear S2 might be the right choice for you. If you don’t want to buy a smartwatch right away and you are more interested in the AppleWatch, you could wait a couple of months longer, until the second generation smartwatch will be launched.

I have always been eager to try out any gadget I could get my hands on. I became a tech journalist so that I could always be around technology and see the newest devices. I use gadgets every day to make my work and life easier. I have enough experience to know If a device is actually improving my activity, offers something useful or new. I will post my honest opinions and judge a device as objectively as I can.
@https://twitter.com/Colin27Anderson
Previous Apple MacBook Air vs. Lenovo Yoga 900
Next Movado’s Bold Motion is a smart Museum Watch