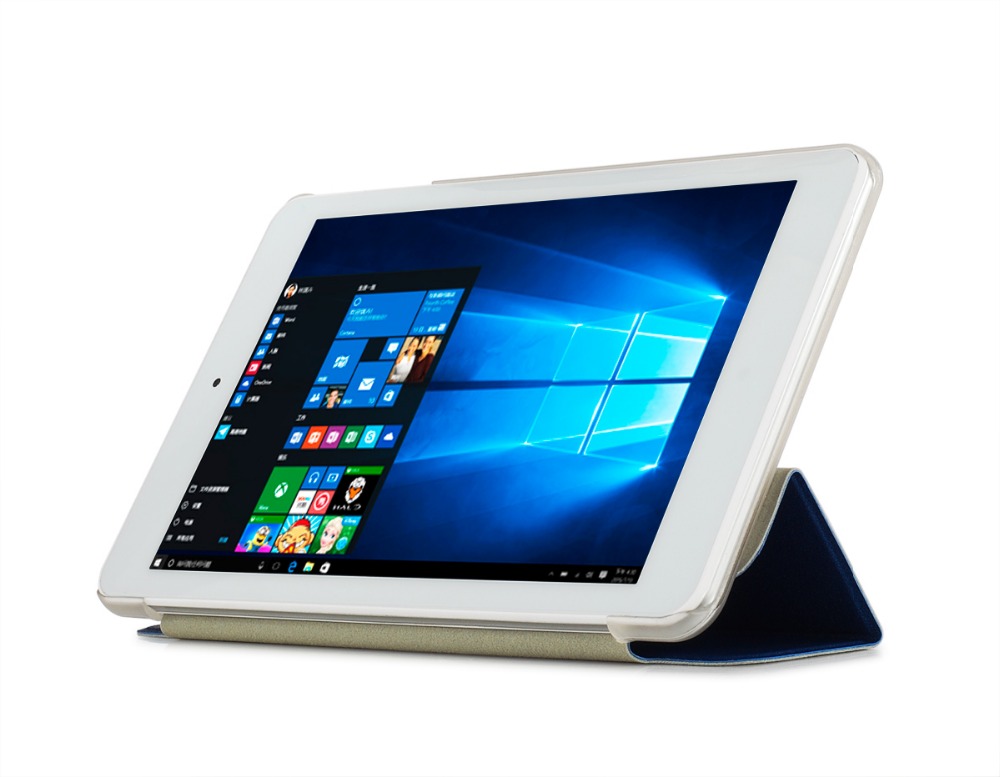 Tablets are keeping up with the tech industry’s pace and trend. They have come a long way since the first models hit the market, those early devices didn’t impress much with their hardware specs and were useful mainly for media playback and web browsing. But they proved a point, that people wanted large screen devices, something bigger than a smartphone and more mobile than a laptop.

Now tablet devices come in a wide range of sizes, colors, features and price tags. These devices have come a long way and can now be used for more than just listening to music, watching a video or browsing the web, the latest models have such good hardware specs that they can be used for gaming and demanding productivity apps.

Today I will talk about the Cube iwork8 Ultimate, an entry level device, priced at $91.99 on Everbuying that runs Windows 10, sports an 8″ screen, has a nice design, and a very budget friendly price tag. At a first glance, it would seem like the iwork8 is living proof that Chinese manufacturers can make powerful and affordable devices and give the top companies a run for their money. I’ve been using this gadget for a few day now and it took me a while to get used to the Windows interface, I’ve seen and held windows phones, but I never used one for more than a few minutes. 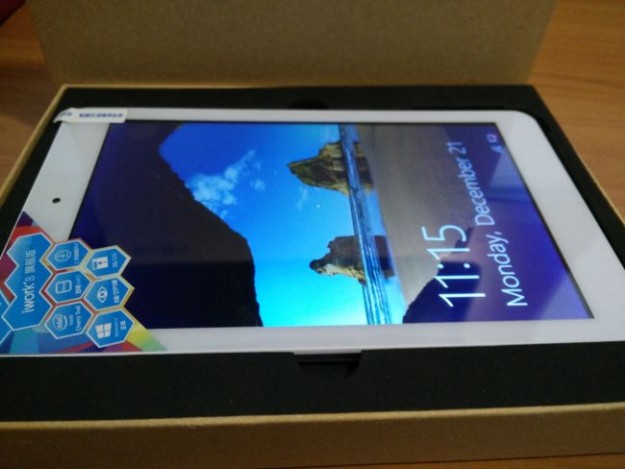 Unlike its predecessor, the iwork8 Dual Boot, the Ultimate only runs Windows 10 at 64 bits, with no option of installing another OS so far. There are rumors that a future software update will make this model dual boot so that users can enjoy the benefits of Android and Windows. After using Windows on this mobile device I have to say that I am not a fan, I use Windows on my laptop and I get my work done with no problems, but to me, at least, it seems that the user interface is not optimized for small screen devices.

At first, I had some problems navigating through the menus and selecting different options because the text and symbols are pretty small and I often touched the screen a little above or to the side of the button I wanted. The interface looks almost exactly like the one used on computers, but everything is smaller to fit on the 8″ screen. You can connect a mouse to the tablet in order to give you more precision, but that will make the experience less comfortable.

Windows Store is a fastly growing apps market place, but it still has a long way to go until it catches up with Apple’s App Store and Google’s Play Store. It’s strong on productivity apps, like the Office Suite, and has most of the important apps, but I have encountered apps that were not optimized properly and in order to perform an action I had to tap above the button for the device to register my command. 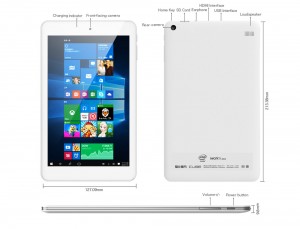 The iwork8 Ultimate has an elegant design and a solid build. Even though the plastic material doesn’t give a premium feel, the design mimics a premium look very well. The front of the device caught my attention from the first moment by the lack of a home button. I was expecting to see it under the display, just like in the case of most tablets, but the iwork8 has the home button on the top edge and looks just like the power button. The back panel is made of plastic and there is a silver rim that runs across the edge of the tablet that connects the front of the device to the back panel. At first, I thought it was made of aluminum, but it just plastic painted in a silver color.

Even tough it’s made of plastic it feels solid and well put together, it doesn’t feel brittle or cheap by no means. The back panel is non-removable and this adds to the solid feel of the tablet by the fact that there are no moving parts.

The front of the tablet houses the 8″ screen, a front facing camera and a red LED that turns on when the device is charging. On the right side, we have the power button and the volume rocker, the left and bottom sides are clean. The top edge is more crowded, it features the home button, micro USB and micro HDMI interface, 3.5 mm  audio jack and the micro SD card slot. The back panel houses the rear camera and the speaker. 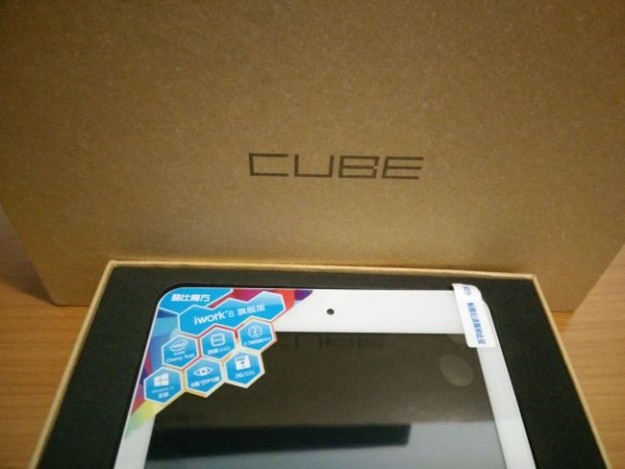 Iwork8 Ultimate comes with a wide 8″ high definition display that has a resolution of 1280 x 800 and 188 pixels per inch. The display delivers a sharp image with punchy colors with no oversaturation. You have no problems reading texts or viewing different kinds of media on this lovely screen. The IPS technology used on the iwork8 Ultimate gets the maximum responsiveness out of the touch screen.

The tablet has a rear mounted speaker that is not impressive. The sound is not as rich as what we can hear on similar devices and after passing 70% on the volume level, the speaker begins to distort. It is better to listen to music with the headphones. 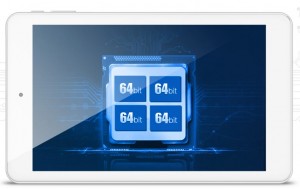 The Cube iwork8 Ultimate is powered by Intel’s Cherry Trail SoC that features a Quad-Core Atom X5-Z8300 CPU clocked at 1.44 GHz at 64 bits and can go up to 1.84 GHz. Both the CPU and the OS run on 64 bits, this is the best combination to get the most power out of the chip. Graphics are processed by the Intel Gen 8 HD graphics GPU with 12 EU cores.

Taking into consideration the fact that this is a budget device, I can say that performance was above my expectations. The tablet handled moderately demanding apps with easy, it was only when I launched Modern Combat 5, a game that uses the GPU intensively that I noticed lag and a drop in frame rate.

The SoC is paired with 2 GB of RAM, which is not bad, but I don’t see why Cube couldn’t have equipped this gadget with 3 GB, taking into consideration that the OS uses almost 1 GB of RAM.

For storage, the tablet offers 32 GB of space and it also supports micro SD cards up to 32 GB. I think that expandable memory should be a feature found on any device, I’m surprised to see this feature on entry-level devices and not on other high-end premium devices. 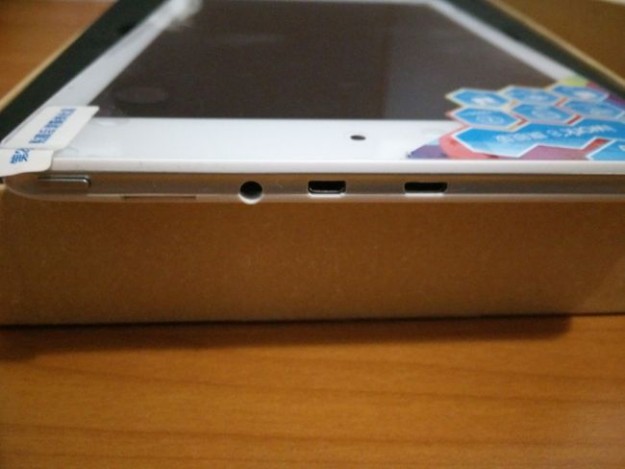 iwork8 Ultimate comes with a pair of 2 MP camera, one on both sides of the tablet. It’s a little disappointing to see a 2 MP main camera in 2015, but I guess that prices had to be cut somewhere. This is not a device for taking memorable pictures but works well for video calling.

There is a strong link between the price tag and the camera quality, just like we see on mobile phones when the price goes down the camera’s quality drops fast. 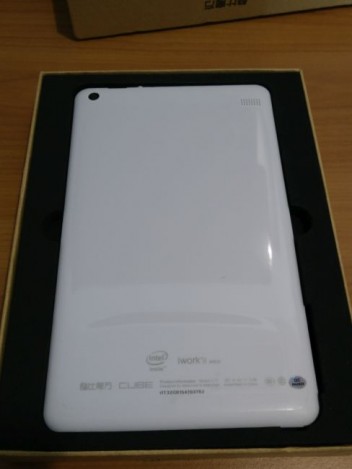 Overall this little gadget comes with a lot for its modest price tag. It can easily perform day-to-day tasks like web browsing, listening to music, watching videos and even moderate gaming. For me, its biggest downside is the fact that it runs only Windows, but if you don’t have a problem with that, then this might be a gadget you are looking for. You can order this Tablet PC for $91.99 on Everbuying.

I have always been eager to try out any gadget I could get my hands on. I became a tech journalist so that I could always be around technology and see the newest devices. I use gadgets every day to make my work and life easier. I have enough experience to know If a device is actually improving my activity, offers something useful or new. I will post my honest opinions and judge a device as objectively as I can.
@https://twitter.com/Colin27Anderson
Previous Oukitel Christmas Sale offers amazing smartphones for low prices
Next Oukitel K10000 vs Oukitel K6000- The battle of the siblings