There were a lot of rumors regarding a mysterious Samsung tablet ever since this fall, but no one knew anything for sure until recently. Now, it seems that a Samsung 12-inch Windows 10 tablet got WiFi and Bluetooth certification. The tablet will run on Windows 10, so it could turn out to be the perfect device for those who need a portable gadget for completing their work even when on the move. A Zauba listing revealed an SM-W700 model number equipped with a 12-inch display, and it indicated a $455 value on the tablet, which means that it will most likely be a high-end device.

According to reports, the display of the Samsung 12-inch Windows 10 tablet will be a Super AMOLED one with a resolution of  2560×1600 or 3840×2400 pixels. This will definitely deliver a great image-quality that will ensure a close to perfect visual experience. Super AMOLED displays are known for their beautiful colors, deep blacks, and this combined with  really high resolution could turn the new tablet into a masterpiece. Other reports regarding Samsung’s SM-W700 model suggest a 14 nanometer Intel Core M processor and 4GB of RAM, which will make the tablet be an efficient and fast one. Reports indicate that the Samsung 12-inch Windows 10 tablet will also have an S-Pen, which only adds to the value of the device. 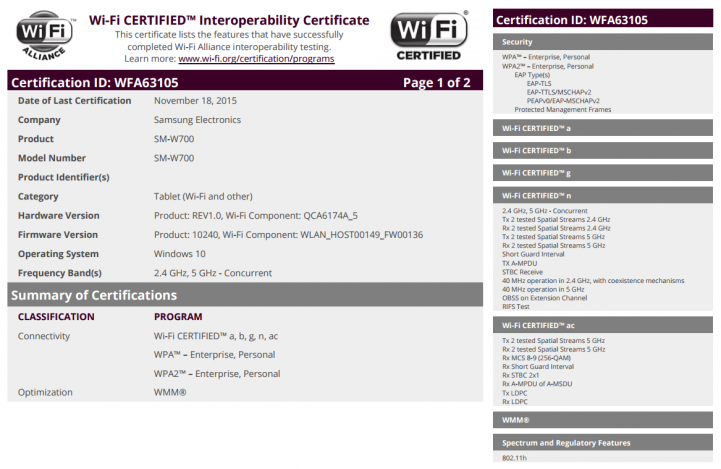 There is no official information regarding the existence of the tablet, its specs, price, or release date, but given the fact that the tablet already got the Bluetooth and WiFi certification and that CES and MWC 2016 are approaching fast, we might see the mysterious 12-inch tablet unveiled at one of these events. As the date of the great unviling will approaach it’s almost sure that more information about the tablet will be leaked, and we will be here to let you know what the Samsung Windows 10 tablet will be like.

I have always been eager to try out any gadget I could get my hands on. I became a tech journalist so that I could always be around technology and see the newest devices. I use gadgets every day to make my work and life easier. I have enough experience to know If a device is actually improving my activity, offers something useful or new. I will post my honest opinions and judge a device as objectively as I can.
@https://twitter.com/Colin27Anderson
Previous iPad Air 3 Release Date and Possible Specs
Next Possible PS5 announcement by Sony