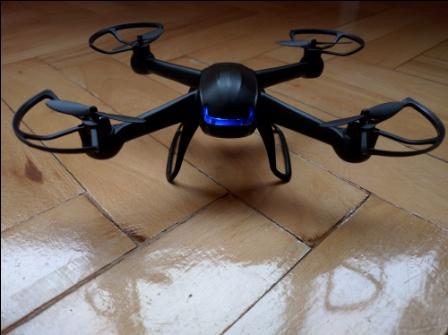 Everyone seems to be into drones these days, so I decided to try one out myself. Since I had no previous experience with these devices, I went for the Flymemo DM007 RC Quadcopter, which is an entry-level drone that is perfect for those who are trying to fly one for the first time. The aircraft is available for only $56.99 on Amazon, so it can’t really be compared to DJI’s drones which cost several hundred dollars, but I was quite impressed with the quality of this affordable drone. It may not be a high-end device, but it definitely is a great entry-level one and its price is more than reasonable. 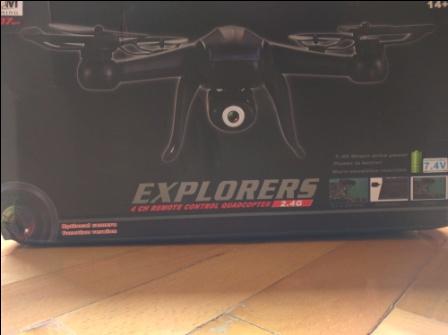 The drone comes in a quite big box, so I thought that the aircraft will also be large, but to be honest, the packaging fooled me, and I was faced with a rather small drone after unboxing it. The remote control of the device actually seems to be bigger than the drone itself. The design of the Flymemo DM007 RC Quadcopter drone is quite sleek. I had the black version, with the LED lights on the front and on the back of the device. The LED light don’t only look great, they also allow users to fly the quadcopter at night also. The drone is extremely light, and it looks and feels plasticky. Thankfully, the plastic it is made from is quite resistant, given the fact that its first journey ended by hitting the wall and falling on the ground without any permanent damages to show. One of its stands fell down, but it was extremely easy to put back and it doesn’t even have a scratch. The battery of the drone goes into a little chamber situated on the bottom of the device and it is protected by a tray that is easy enough to open without any difficulties but will still make sure that the battery won’t fall out when it shouldn’t. To be honest, I was quite impressed with the build quality of the Flymemo DM007 RC Quadcopter, because at frist glance it seemed plasticky and cheap, but in the end, it proved to be quite resistant and well built. There is a black and a white model, some include a 2MP camera, and the others, like the one I got to test, don’t. 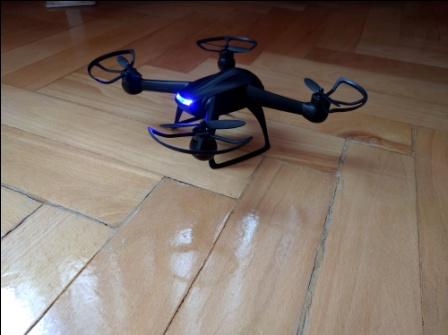 The Flymemo DM007 RC Quadcopter is quite easy to control once you got the hang of it. Even though it’s first trip ended in the wall, it was really easy to learn which control does what and how to handle the remote control in order to direct the device exactly where I wanted it to go. The remote control is quite responsive, so you should be delicate with it, otherwise, you could land your DM 007 in the wall too. Those who never had or flown a drone before should consider starting out with the beginner speed until they get used to the controls and how sensitive and responsive they are, and after that, they can switch to the pro speed mode, which is a lot faster than the beginner’s. Even though you can fly the Flymemo DM 007 indoors, it would be better to learn how to fly it outdoors, preferably on a grassy field, so if you crash it, the drone won’t suffer any real damages. The display of the remote control will offer you details about the speed, signal strength, the battery power, the used speed and tuning mode, and so on. The 6-axis gyro featured by the Flymemo DM007 RC Quadcopter  nicely stabilizes the aircraft and the responsive remote control allows users to smoothly rotate the device 360 degrees and turn the gadget right or left. The quadcopter is incredibly easy and fun to fly, so it could turn into the perfect first drone for everyone that would like to own one. 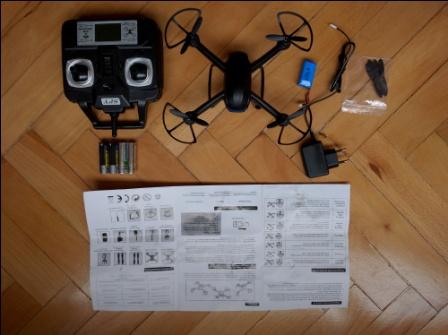 The Flymemo DM007 RC Quadcopter is powered by a 7.4V 380mah battery that is, to be honest, quite tricky to place in the device. It connects to the aircraft with a cable that it quite hard to place under the battery in such a way that the bottom tray can be closed after the battery is placed in the gadget. However, once you manage to find the perfect position for the battery, the tray will close and it won’t allow the battery to fall out under any circumstances. The remote control needs 4 1.5V AA battery batteries which are not included in the package. The 380mAh battery needs to charge for around 80 to 90 minutes and it will offer about 7-8 minutes of flight time. Even though it is not quite impressive, it does behave like any other quadcopter in its price range or, even more, expensive ones, so it isn’t that disappointing either. The remote control has a range of around 150metres, but considering the quite short battery life of the aircraft I advise you not to use the full range if you don’t want to pick up your gadget from between the bushes or who knows where else. It’s better to keep the quadcopter in your visual range because once it goes out of batteries and the LEDs go off, it will be quite difficult to retrieve if you fly it far away. 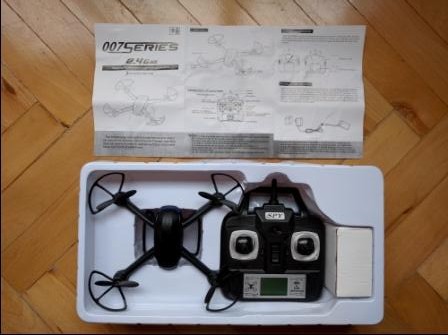 Although the model I got to test didn’t have a camera, the one that is on sale for $56.99 on Amazon does come with a 2MP camera. Don’t expect the video quality that is delivered by DJI’s drones which cost several hundred dollars, or even thousands, but it will still be able to capture some good quality images. If you are not satisfied with the image quality delivered by the camera of the Flymemo DM 007 RC Quadcopter, you can opt for changing the camera with another one that is small and light enough for your quadcopter to handle it. The 808 Keychain HD camera, for example, could be a great option because its lightweight and dimensions make it a perfect match for the Flymemo DM 007. Besides the camera and the Flymemo DM 007 RC Quadcopter, the package also includes a transmitter, a protection set, one LCD monitor, 4 spare blades, a 2GB memory card, a card reader, a charger for the battery, a user manual, and a landing skid.

The Flymemo DM007 RC Quadcopter is definitely not comparable to a DJI drone, but then again, its price is almost ten times lower than the one the DJI drones go for. Overall, the DM007 is a good, we could even say great, entry-level aircraft that is easy to control and offers a good battery life. The build of the drone might come off as being cheap at first sight, but thankfully it proved to be resistant, so users won’t have to worry about seriously damaging their drone at every fall. The low price of the drone turns it into one of the best entry-level drones users could own. It’s fun to fly it, so if you would like to purchase one, the Flymemo quadcopter is a great possible choice.

I have always been eager to try out any gadget I could get my hands on. I became a tech journalist so that I could always be around technology and see the newest devices. I use gadgets every day to make my work and life easier. I have enough experience to know If a device is actually improving my activity, offers something useful or new. I will post my honest opinions and judge a device as objectively as I can.
@https://twitter.com/Colin27Anderson
Previous Microsoft to Roll Out Windows 10 Update to Lumia Smartphones
Next Xbox One with ‘Tom Clancy’s The Division’ Bundle Now Available