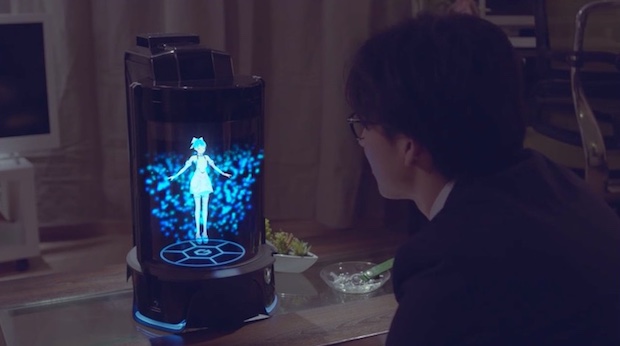 Vinclu’s Gatebox Brings a Holographic Assistant to Our Homes

Artificial intelligence is gaining a lot of terrain these days and tech companies are developing multiple products that use this feature. Vinclu, a Japanese company is currently working on a device, called Gatebox, that is somewhat similar to Amazon’s Echo but the company adds even more personality to the gadget with a holographic image of the personal assistant. This way, users won’t only be able to hear the virtual assistant, but they can also see her, making the experience even more fun.

The Gatebox uses Internet of Things to control different devices in our homes, like TVs, air conditioning units, light, emails, music, and more. The holographic personal assistant, called Azuma Hikari, is so advanced that it will be able to get to learn the user’s habits and even take actions based on them, without the user needing to ask her to do so. Basically, the Gatebox’s behaviour-learning technology will turn the holographic assistant into a personality that will resemble the one of the user’s a lot, and will be able to predict what the users might want it to do, based on the previous behaviour of the owner. If you like to dim the light every evening at 8 o’clock, the holographic assistant will learn to do it without you asking for the light to be dimmed. How great is that?

According to reports, the Japanese company that developed the device is planning on launching pre-orders on a crowdfunding platform this year, and it also plans on offering alternative characters for Azuma Hikari in the future. In case you are not convinced by the anime holographic assistant, wait around to see what the alternatives will be like, maybe one of them will become your personal assistant sometime in the future. You won’t be able to have real conversations with it just now, but a help around the house that enables you to more easily control your smart devices can come in handy.

I have always been eager to try out any gadget I could get my hands on. I became a tech journalist so that I could always be around technology and see the newest devices. I use gadgets every day to make my work and life easier. I have enough experience to know If a device is actually improving my activity, offers something useful or new. I will post my honest opinions and judge a device as objectively as I can.
@https://twitter.com/Colin27Anderson
Previous Brave Browser Promises to be Faster and Ad-Free
Next Valentine’s Day Promotion Offers Up To 75% Off Sweet Deals