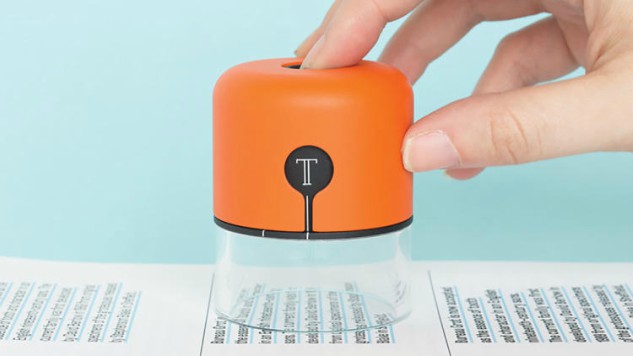 Every one of us has seen at least once a typed text on a storefront, in a menu or an invitation and was completely bedazzled by the fonts or colors used to create it. These little things can inspire us in creating something of our own, but it’s not always easy to figure out exactly what font or color was used by the creators of these texts. Thanks to Fiona O’Leary, a student at the Royal College of Art, and her prototype, the Spector, we might be able to recognize and recreate almost any fonts and colors.

The Spector is a little, handheld device that is able to scan any text or surface and search for the font type used in a database. The prototype doesn’t only recognize fonts, however, it is also able to break colors don into exact CMYK or RGB values, so the user will be able to recreate the exact same color tone on their computer using the Adobe InDesign application. Although the gadget might not be interesting enough for regular people, it will definitely help those who work in typographies, in event planning and so on in their work. Recreating the exact font your clients have seen on a brochure or invitation, or even in the streets while wondering out and about will be a lot easier to recreate.

What differentiates the Spector from existing applications that were created for recognizing font types or colors is that this little device can be physically carried around and used to scan different objects without the need of a computer. The gadget captures the image of the object it is placed on and then uses an algorithm to translate the picture into information regarding not only the font type but also the size of the captured letters and their kerning and leading.

At this point, the prototype only recognizes seven typefaces, but the creator of the devices intends on taking the gadgets further, and make the Spector work with a larger font database. The device is not for sale just now, but whenever O’Leary will decide to take it to the next level, and go for mass production, it will most likely become a very popular device in a very short period of time.

As long-time IT enthusiasts, gamers and gadget fanatics, Mark and I have been working in the industry for a long time and we both have a vast experience in dealing with smartphones, tablets, PC and console hardware and everything tech-related. My list of industry insiders is long-enough to allow me to get insights into what's going on in the technology field and provide my readers with interesting and timely updates. I focus on brief, to-the-point reporting, keeping the "bla bla" to a minimum and making sure my readers get easy access to important information and updates. I mainly specialize in Android-based mobile devices, leaving iOS and Apple devices in Mark's capable hands.
Previous Google Marlin Promises to be One Powerful Device
Next Google is Reportedly Working on Nexus Smartwatches