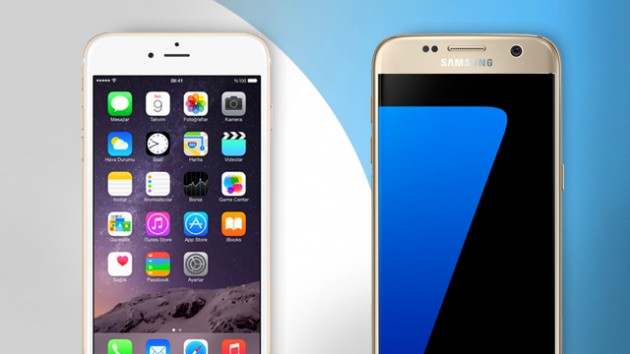 There is a huge competition going on in the smartphone market, and the two top competitors are without a doubt, Samsung and Apple. Although in the past few years Apple seemed to have dominated the market with its iPhone models, according to Kantar Worldpanel, via Android Authority, this year Samsung is the winner. The Galaxy S7 and S7 Edge outsold the iPhone 6S and iPhone 6S plus in the first quarter of the year. Samsung “accounted for 37% of smartphone sales and Apple 29%” in the three months period that ended in May 2016. The Galaxy S7 and S7 Edge made up 16% of total sales, while the iPhone 6S and 6S Plus only managed to pull off 14.6%.

This, of course, doesn’t mean that iPhone users are turning towards Samsung handsets. In fact, the cited sources disclosed that the number of users who opt for switching from Samsung to the iPhone  is three times larger than that of the people who ditch their iPhones for Samsung devices. This isn’t exactly great for the Korean company, but the sales are the ones that matter at the end of the day, and they suggest that Samsung rules the charts at this point.

The statistics might change once the iPhone 7 and the Galaxy Note 7 will be released. It’s hard to say whether the Samsung flagship will manage to win over some iPhone users or not. The upcoming handset is rumored to be quite powerful and  is said to offer some great new features, but will it be enough to impress people who are committed to Apple? Only time will tell. The Korean company can enjoy its current status until then. Apple has dominated the US smartphone market for years, so Samsung can really be pleased by the fact that they managed to dethrone the tech giant on its own turf with the help of the Galaxy S7 and S7 Edge.

Given the fact that both companies deliver high-end handsets, what really makes the difference for the majority of users is the operating system they use. Android users will most likely stay loyal to the software developed by Google, while iPhone users will probably continue using iOS devices. It’s really a matter of habit, but it is really hard to break. Apple and Samsung are definitely the most powerful smartphone manufacturers in the world at this point, so it’s not likely that we will see any other company dethrone either of them in the near future. Which one do you prefer? Samsung or Apple? And why? Please share your opinion with us in the comment section below.

I have always been eager to try out any gadget I could get my hands on. I became a tech journalist so that I could always be around technology and see the newest devices. I use gadgets every day to make my work and life easier. I have enough experience to know If a device is actually improving my activity, offers something useful or new. I will post my honest opinions and judge a device as objectively as I can.
@https://twitter.com/Colin27Anderson
Previous Nintendo Shares Have Risen More Than 50% Since Pokemon Go Was Launched
Next Nintendo Will re-Release the NES