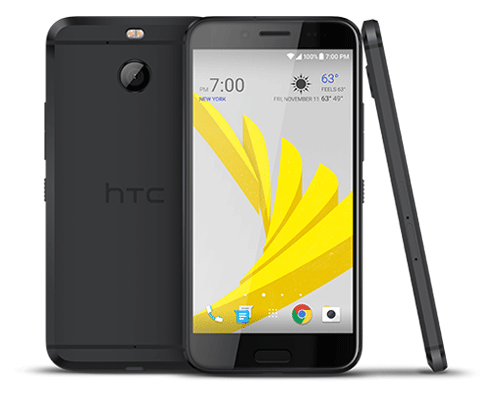 HTc just announced the latest addition to their lineup of smartphones, the HTC Bolt. According to the company, this is the fastest Sprint smartphone on the market at this time. Yes, the Bolt is a Sprint exclusive smartphone, so customers will only be able to purchase it from this particular carrier. The smartphone is available starting November 11 for $600. Customers can choose the 24 months installment billing offered by Sprint, so they would only pay $25 a month. At first sight, this might look pricey, but it is possible that the handset will prove to be worth it.

The design of the smartphone is somewhat similar to the one of other HTC smartphones, but it may not be everyone’s cup of tea. The HTC Bolt is flatter than other devices delivered by the same manufacturer, and it is larger than the recently launched HTC 10. The 5.5-inch handset is a combination of metal and glass, both of which confer a premium look and feel to the device. The Quad HD display of the smartphone is able to ensure a good image quality, and the aluminum unibody has an IP57 water resistance. The fingerprint sensor of the handset is placed on the front cover, where the Home button is.

The HTC Bolt has a Qualcomm Snapdragon 810 processor under the hood. Even though this is not necessarily a bad one, it’s quite surprising that the company didn’t go with the Snapdragon 820 chipset for their “fastest” smartphone. The handset includes only 3GB of RAM, which is also lower than what we’ve seen in other devices this year. Users will get 32GB internal storage for their money, but they can further expand this thanks to the 2TB microSD card slot of the phone.

The HTC Bolt features a 16MP back camera with f/2.0 aperture and an 8MP selfie camera. 4K video is supported by the handset. When it comes to the audio section, the smartphone could win some supporters. The Bolt features HTC BoomSound Adaptive Audio, which adjusts the audio output of the device to suit the personal hearing capabilities of every user. It does this by scanning the ears of the user and the ambient noise around them. Speaking of audio, the HTC Bolt doesn’t have an audio jack. Instead, just like the iPhone 7, it has a USB Type- C port, where users can connect their ear pieces. Unfortunately, this also means that they can’t charge their smartphones while listening to music on their handsets.

The smartphone has a 3200mAh battery which, according to the manufacturer should easily ensure a whole day’s worth of battery power. Until we manage to conduct a battery drain test, we’ll just have to take their word for it. Thankfully, the smartphone also supports Quick Charge 2.0, so in case it runs out of juice, users can charge it quite fast. The HTC Bolt runs on Android Nougat out of the box, so this is a good point for the device. These are the major features and specs of the Bolt. Customers will decide whether they are good enough for the price tag it comes with or not.

At first researching gadgets and technology was just a hobby, but it quickly became a lifestyle and a full-time job.
Previous Samsung Galaxy S8 Model Numbers Confirmed By Tipster
Next OnePlus 3T Official Teasers Posted on Twitter