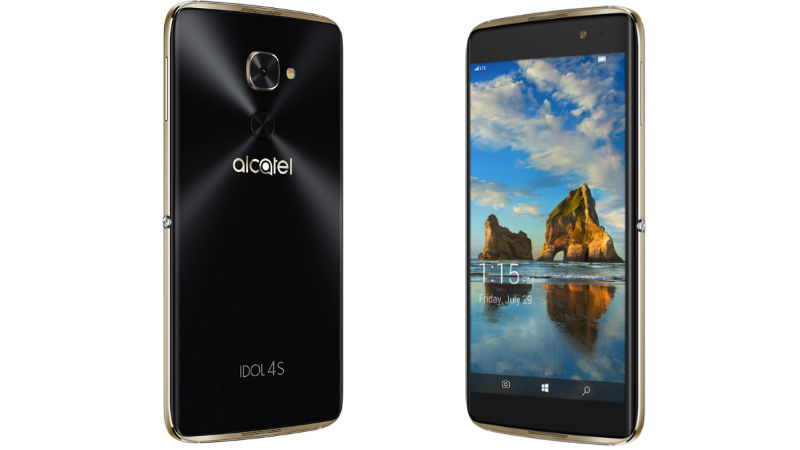 The Alcatel IDOL 4S features a Qualcomm Snapdragon 820 chipset with an X12 LTE modem. Besides this, it has an Adreno 510 GPU. The device includes 3Gb of RAM and 32GB internal storage. The latter can be further expanded by up to 256GB thanks to the microSD card slot of the smartphone. The IDOL 4S comes with a 16MP primary camera with dual LED flash and phase detection autofocus. it also has an 8MP front- facing camera for selfies and video calls. The Alcatel flagship is also quite secure. Besides the fingerprint sensor, it also features Windows Hello for added security. Naturally, one of the best features of this smartphone is Cortana, the personal assistant.

The 3000 mAh battery of the smartphone is not exactly impressive. however, it is enough to take users through the day under normal conditions. The design of the smartphone is not innovative, but it is pleasant. After all, there isn’t that much wiggle room when it comes to smartphone designs. And the design was never Alcatel’s strongest point. All in all, the Alcatel IDOL 4S is a nice smartphone with more than decent features and specs. Given its medium- range price tag, it is as good as it gets. Now that it is available without a subscription, it is even better. Not everyone wishes to purchase a smartphone that only works with one carrier.

At first researching gadgets and technology was just a hobby, but it quickly became a lifestyle and a full-time job.
Previous Epson Introduces Faster Document Scanner
Next HYJAX Releases New Mobile Charging Solution