Home / News / Science / Hubble spies Wasp-12b, a planet so dark it absorbs almost all light that touches it 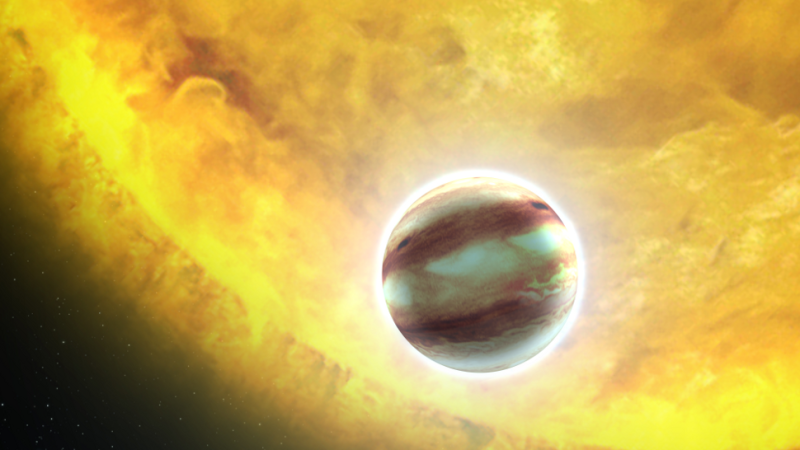 Hubble spies Wasp-12b, a planet so dark it absorbs almost all light that touches it

A team of researchers have used the Hubble telescope to make another incredible discovery. The space telescope has spotted a “hot Jupiter” dubbed Wasp-12b, a planet so dark it absorbs almost all light.

The planet goes by Wasp-12b. The dark planet is hot Jupiter. This is a huge planet that orbits incredibly close to its host star. Wasp-12B is tidally locked which means that the day side of the planet reaches over 4600 degrees fahrenheit. The night side is significantly cooler leading to very hostile conditions.

The UK based team has been using the Hubble space telescope to attempt to measure the amount of light reflected back by the planet. What they found was pretty incredible. The planet absorbed around 94% of all light that hit it. Normally planets like this have one incredibly hot side and one incredibly cold side. This allows clouds to form on the night side which should reflect light back. Yet even with this water vapor Wasp-12b is still a planet so dark it absorbs almost all light that reaches it.

Sadly for Wasp-12b it will neither burn brightly or long. The planet is orbiting so close to the sun that it is slowly being devoured by its host star. Huge clouds of materials are floating around the planet, including a number of chemicals never before detected. It won’t be long before the planet has been torn apart by its host.

The most interesting aspect of this study is that it demonstrates a surprising diversity within “hot Jupiters”. The previously surveyed planet HD 189733b was significantly cooler and displayed very different results from Wasp-12b. The researchers hope that their study will not only demonstrate the importance of observing light in order to better understand planets.

Wasp-12b is another example of just how important the Hubble space telescope is. Over the last year it has caught some of the most beautiful images in space. Including helping to produce an incredible picture of the Crab Nebula. The telescope has also spotted Aurora dancing over the skies of Uranus.

Tech Editor with lots of experience with PC hardware components, iOS and Windows-based mobile devices, and love keeping myself up-to-date with any developments in the industry, which I make my job in sharing with you, our readers.
Previous China is attempting to gain control over cryptocurrency which could greatly benefit NEO
Next Uber’s London ban will define the company’s future in Europe