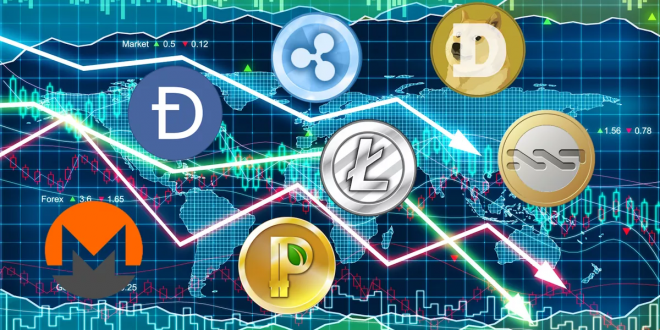 Cryptocurrency is now a part of our reality. Those who still don’t own a least one of these virtual coins have at least heard of their existence. Bitcoin is definitely the most popular cryptocurrency with Ethereum coming in close, however, there are lots of other cryptocurrencies that are trying to establish their place in the charts too. Unsurprisingly, the ones that evolved the most impressively last month were the ones that are not as popular as Bitcoin. Then again, they are not as valuable either, and it’s a lot easier to see a big increase in value when we speak of smaller amounts than to see Bitcoin double its value.

Th cryptocurrency that impressed the most last month was, according to the latest charts, was Mixin. It evolved quite beautifully and has passed $1,000. To be more exact, one Mixin is now worth $1,292. This means that it almost tripled its value over one month, which is great for those who invested in it. Ontology also evolved spectacularly, at least in percentage. The cryptocurrency has increased by 284.35%. The evolution is not as great as the one of Mixin, though, as the Ontology is now worth $8.44. EOS and Aeternity also saw increases of more than 200%, however, none of them reached more than $19.

While the less known cryptocurrencies are the ones that have risen the most in percentage, the more stable coins have kept their value and even increased it a little bit. Bitcoin is now worth $9,183, which is not as impressive as the $17,900 it reached at one point, however, over the last month, it managed to increase by 32.29%. Of course, those who invested in Bitcoin exactly when it was the most expensive have lost a lot as its value decreased over the last months, however, those who invested in it right from the start or at least in its beginnings still won a lot thanks to their leap of faith.

More and more companies accept payments in certain cryptocurrencies now. Due to this fact, it’s safe to assume that these virtual coins are here to stay. Investing in one cryptocurrency or another is not an easy choice to make. Some of them disappear just as fast as they showed up, others skyrocket fast and then drop drastically. Also, there are coins that see a steady increase. These will not turn their investors into billionaires from one day to another, still, they are a good investment and they pay off. One thing is sure: you should never invest in cryptocurrency more than you are willing to lose. Learn as much as you can about the cryptocurrency you are planning to invest in and spend only the money you can spare.

I'm very curious when it comes to technology. I enjoy tinkering with entertainment and communication gadgets.
Previous The Xiaomi Mi 6X launches this week, will cost around $250
Next Venezuelan schools could operate cryptocurrency mines in the future