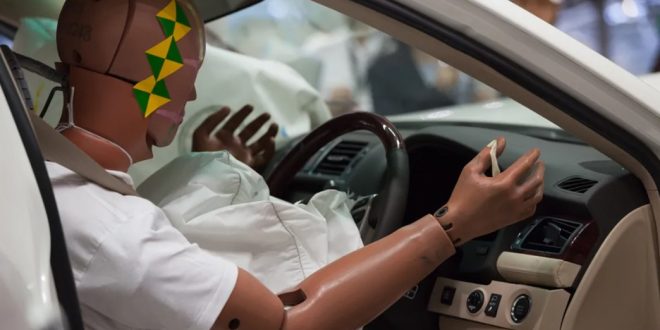 A team of Swedish researchers has created the first crash test dummy meant to imitate a woman’s physique, seeking to put a stop to the long history of man-centric safety in automobiles. The dummy will attempt to replace current methods, which severely misrepresent a woman’s body in practically every dimension, standing at an average height of 162 centimeters (5 feet 3 inches) and weighing 62 kilograms (137 pounds).

The development of the crash test dummy in the 1970s transformed automobile safety. Car makers could suddenly slam their designs into concrete barriers and analyze the effects on the human body, a test that few actual humans were prepared to take part in. Since then, crash test dummies have improved and grown more reflective of a human body – or, at least, a male physique.

This is the source of the problem. It may surprise you to learn that crash test dummies are always male or children, and that women in cars are frequently portrayed by a smaller version of the male dummy. At 149 cm (4 ft 8 ins) tall, the mini-man dummy is about the size of a twelve-year-old girl. People are either men or children in the viewpoint of vehicle makers.

Unfortunately, this has real-world consequences for car safety. According to a study conducted by the University of Virginia, women were substantially more likely than males to be wounded in an automobile collision while seated in the front seat. Furthermore, they are nearly three times more likely to experience whiplash in an accident than a male counterpart, which is likely owing to a masculine bias in safety technology.

“We know from injury data that when it comes to low severity impacts, females are more vulnerable,” said lead researcher Astrid Linder in a statement to the BBC.

“So, in order to ensure that you find the seats with the most protection for both parts of the community, we must have the people at greatest risk represented.”

The researchers expect that this new dummy will help to close that gap by increasing female representation in car safety studies. But, before that can happen, Dr. Linder requires regulators all across the world to recognize and enforce the use of her dummy, or else many will continue to utilize their existing ways.

As long-time IT enthusiasts, gamers and gadget fanatics, Mark and I have been working in the industry for a long time and we both have a vast experience in dealing with smartphones, tablets, PC and console hardware and everything tech-related. My list of industry insiders is long-enough to allow me to get insights into what's going on in the technology field and provide my readers with interesting and timely updates. I focus on brief, to-the-point reporting, keeping the "bla bla" to a minimum and making sure my readers get easy access to important information and updates. I mainly specialize in Android-based mobile devices, leaving iOS and Apple devices in Mark's capable hands.
Previous The World’s Largest Aircraft Carrying Hypersonic Rocket Breaks a Major Milestone
Next What can we expect from the world’s largest technology event in 2023?

Allow space for yet another play about preventative health: After four years of covert development, …