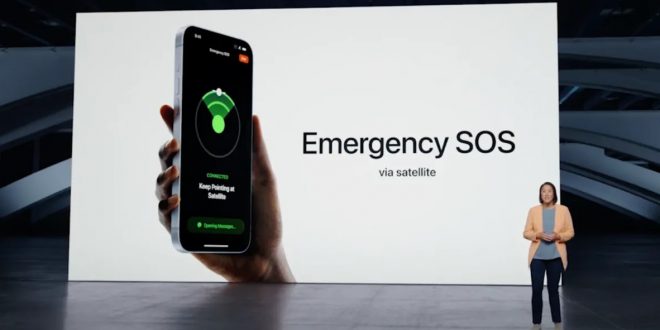 Later this month, your iPhone 14 or 14 Pro will be able to make satellite calls to emergency services, according to a release issued by Apple on Thursday regarding its $450 million investment in the technology. When a person is beyond the cell service coverage area, Apple claims that the service will enable them to communicate their location and contact assistance. For the following two years, it will be free for iPhone 14 customers.

When the service goes online, it will let users text emergency agencies and give emergency contacts some details about their predicament. Apple calls the service Emergency SOS via satellite. According to Apple, communications can be relayed by satellite in as little as 15 seconds if the sky is clear.

Apple’s investment is assisting its partner, Globalstar, which manages a fleet of 24 satellites for communication purposes, in growing and improving its satellite and communications network.

The precise release date for Emergency SOS via satellites is unknown, however Apple has stated that it would require the iOS 16 software upgrade, which will be available in November. It will first be accessible to everyone in the US (including Puerto Rico and the US Virgin Islands) and Canada who owns an iPhone 14 or 14 Pro. It won’t apply to iPhones bought in Hong Kong, Macao, or the Chinese mainland.

As long-time IT enthusiasts, gamers and gadget fanatics, Mark and I have been working in the industry for a long time and we both have a vast experience in dealing with smartphones, tablets, PC and console hardware and everything tech-related. My list of industry insiders is long-enough to allow me to get insights into what's going on in the technology field and provide my readers with interesting and timely updates. I focus on brief, to-the-point reporting, keeping the "bla bla" to a minimum and making sure my readers get easy access to important information and updates. I mainly specialize in Android-based mobile devices, leaving iOS and Apple devices in Mark's capable hands.
Previous Twitter’s answer to the blue tick issue was to add a second, ugly tick
Next Amazon consolidates robotic initiatives in response to economic challenges