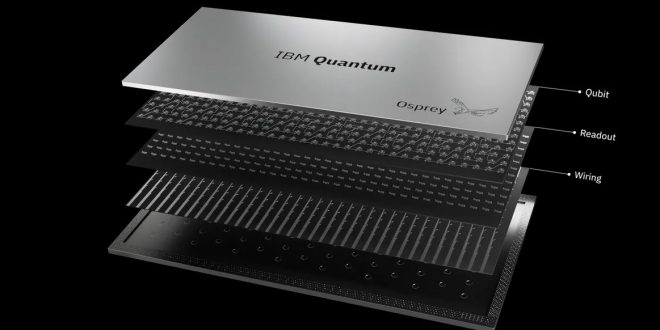 We are getting closer to the ultimate aim of practical quantum computing with IBM’s announcement of the huge 433-qubit “Osprey” quantum processor. The company is aiming for a 4,000-Qubit processor by 2025, and it seems to be on track to scale up its quantum chips to previously unheard-of levels. This means that they may soon be prepared to take on jobs that are insurmountable for conventional computers.

The new 433-qubit “Osprey” processor, according to Dr. Daro Gil, senior vice president of IBM and director of research, “brings us closer to the point where quantum computers will be employed to tackle previously unsolvable issues.”

“Together with our partners and clients throughout the world, we are continually scaling up and improving our quantum technology across hardware, software, and classical integration to solve the greatest problems of our time. This research will serve as a cornerstone for the upcoming quantum-centric supercomputing age.”

The qubit, a fundamental quantum information unit with more states than a conventional computer, serves as the foundation of a quantum processor. Comparing an 8-bit computer to an 8-qubit computer is the simplest way to understand it. In the conventional system, where each bit may either be 0 or 1, you might have 00000000-11111111 and any combination in between. The range of possible values in an 8-qubit system is 00000000–99999999. As a result, each qubit that is added to a processor signifies a significant improvement in capability and potential processing power.

However, it is challenging to fit functioning qubits onto a compact computer chip, and many of them must be devoted to error-checking since quantum computers are more prone to faults than existing computers are. The only way to make quantum chips practical is to scale them up to increasing numbers of functional qubits. Last year, IBM unveiled a 127-qubit CPU, and they don’t appear to be slowing down.

“As we move along our quantum roadmap, the IBM Quantum Summit 2022 represents a turning point in the development of the global quantum computing industry. We will continue to see acceptance and expansion of the quantum industry as we scale up quantum systems and make them easier to use “IBM Fellow and Vice President of IBM Quantum Jay Gambetta made the assertion in a statement.

Our innovations “define the next quantum wave, which we call quantum-centric supercomputing, where modularity, communication, and middleware will contribute to better scaling computation capability, and integration of quantum and classical processes.”

As long-time IT enthusiasts, gamers and gadget fanatics, Mark and I have been working in the industry for a long time and we both have a vast experience in dealing with smartphones, tablets, PC and console hardware and everything tech-related. My list of industry insiders is long-enough to allow me to get insights into what's going on in the technology field and provide my readers with interesting and timely updates. I focus on brief, to-the-point reporting, keeping the "bla bla" to a minimum and making sure my readers get easy access to important information and updates. I mainly specialize in Android-based mobile devices, leaving iOS and Apple devices in Mark's capable hands.
Previous Shuffles, a collage-making application from Pinterest, is released to the public
Next Twitter’s answer to the blue tick issue was to add a second, ugly tick