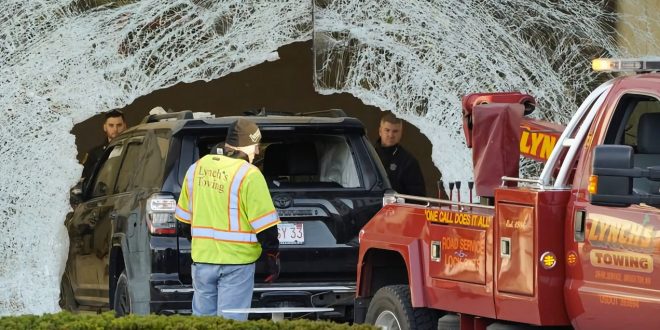 One person was killed when a driver smashed through the Apple Derby Street retail store in Massachusetts. The driver claimed that the incident was a “unfortunate accident” rather than an attack.
On Monday morning, 52-year-old Bradley Rein crashed his Toyota 4Runner through the front glass of the Apple Store in Hingham, Massachusetts. Speeding through the glass, the car came to a stop only when it struck the back wall of the store.

MassLive reports that was arraigned on charges of reckless motor vehicle homicide on Tuesday morning. According to reports, Rein alleges that he was unable to brake in time because his foot got trapped on the gas.

Bail was requested to be set at $20,000 by Rein’s defense attorney, who described the occurrence as a “unfortunate accident.” Instead, the Hingham District Court put the bond amount at $100,000.

Rein was allegedly unharmed after the collision, despite previous witness reports that he was bloodied. He went to the Hingham Police Department with the officers, where he voluntarily submitted to a breathalyzer test that came back negative.

According to MassLive, at least 20 people suffered serious injuries. 17 victims were treated by doctors at South Shore Hospital; others were transported to a hospital in Boston; they labeled the wounds as “life and limb-threatening.”

The wounds include head traumas and “mangled limbs,” according to the description. Kevin Bradley, a 65-year-old New Jersey resident who was declared deceased at the site, also perished in the collision.

Rein informed the police that he had no medical conditions and that, as far as he knew, his car was in perfect working order.

As long-time IT enthusiasts, gamers and gadget fanatics, Mark and I have been working in the industry for a long time and we both have a vast experience in dealing with smartphones, tablets, PC and console hardware and everything tech-related. My list of industry insiders is long-enough to allow me to get insights into what's going on in the technology field and provide my readers with interesting and timely updates. I focus on brief, to-the-point reporting, keeping the "bla bla" to a minimum and making sure my readers get easy access to important information and updates. I mainly specialize in Android-based mobile devices, leaving iOS and Apple devices in Mark's capable hands.
Previous This soft robot that is modeled after manta rays glides through the water
Next In just a few months, Asahi Linux for Apple Silicon has advanced significantly