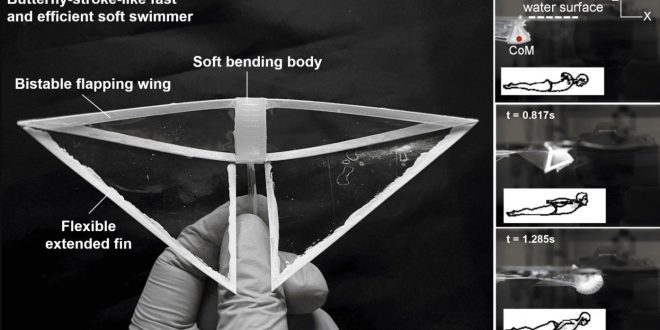 Soft robots with biological inspiration make a lot of sense in many different contexts, but they are not without drawbacks, just like any other category of technology. These flexible constructions, among other reasons, may find it difficult to move as quickly as their more rigid counterparts. An additional source of inspiration from nature that helped researchers at North Carolina State University accelerate swimming was the manta ray.

It makes sense to look at the fish. These shark relatives can move through the water like birds thanks to their enormous, wing-like pectoral fins. But in the end, the scientists gave them a completely different animal’s name. The “butterfly bots” got their nickname because of how much their arms resembled those of people doing the butterfly stroke [see the image above].

There were two robots constructed. The first was built with speed in mind, and can move 3.74 body lengths per second, which is far faster than soft robots that can only move a single body length in that period. A second, built for better control, travels at a speed of about 1.7 body lengths per second. In the first instance, turning is complicated by the design. In order to turn the robot by flapping just one wing at a time, the researchers fitted a second drive train with the second.

According to a press release from Jie Yin, the paper’s co-author, “swimming soft robots have not yet been able to swim faster than one body length per second, but marine animals – such as manta rays – are able to swim much faster, and much more efficiently.” “We wanted to investigate if we could create faster, more energy-efficient soft robots by borrowing from the biomechanics of these creatures. The prototypes we’ve created function incredibly well.

Using a pneumatic air tube system, the body is raised and lowered, which bends the wings and fins and moves the system forward. According to Yin, the majority of prior attempts to create flapping robots have concentrated on employing motors to directly power the wings. Our method makes advantage of bistable wings that are moved passively by the core body. This is a significant distinction since it enables a more lightweight, streamlined design.

The group claims to be developing an untethered, autonomous version of the soft swimming butterfly robot.

As long-time IT enthusiasts, gamers and gadget fanatics, Mark and I have been working in the industry for a long time and we both have a vast experience in dealing with smartphones, tablets, PC and console hardware and everything tech-related. My list of industry insiders is long-enough to allow me to get insights into what's going on in the technology field and provide my readers with interesting and timely updates. I focus on brief, to-the-point reporting, keeping the "bla bla" to a minimum and making sure my readers get easy access to important information and updates. I mainly specialize in Android-based mobile devices, leaving iOS and Apple devices in Mark's capable hands.
Previous Researchers are developing self-constructing robots
Next Driver claims the fatal car crash outside the Apple Store was an accident