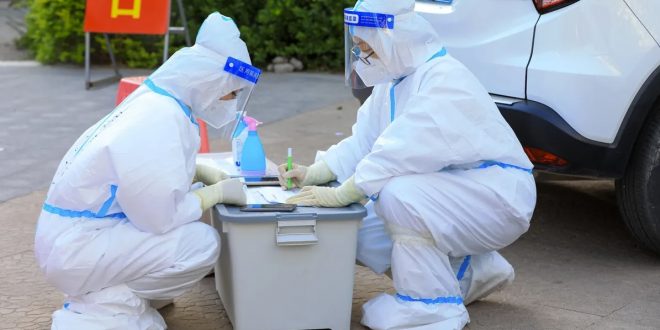 WHO “Very Concerned” About Rise In COVID-19 Cases in China

According to reports of rising COVID-19 cases and overburdened healthcare systems in China, the World Health Organization (WHO) is “extremely worried,” according to WHO Director-General Tedros Adhanom Ghebreyesus.

The declaration follows horrifying photographs and videos from the typically secretive country, which show hospitals and funeral homes struggling to handle what appears to be a huge tidal wave of severe COVID cases.

According to reports, there are not many ICU patients in China, but according to anecdotal evidence, the ICUs are getting busy, said WHO emergency chief Michael Ryan to the BBC.

He continued, “We’ve been saying this for weeks. With only public health and social efforts, this highly contagious virus was always going to be very difficult to entirely eradicate.

Few countries have fought the disease with more vigor during the COVID-19 outbreak than China. There, the “zero-COVID” policy – one of the most stringent public health measures intended to suppress and control the virus’s spread as much as possible – has persisted longer than virtually everywhere else, and was only recently effectively abolished following widespread protests against the policy.

Even while the program was unpopular, it did appear to be effective: despite being the nation where the virus was first discovered, China routinely reports much lower rates of infection than the majority of Europe and North America.

But by the end of 2022, even though the government’s zero-COVID strategy continued to be effective, it appeared that there was no more positive news to report. By November, state media was reporting COVID statistics at all-time highs on a daily basis, and generally uncommon critiques of the nation’s healthcare system were starting to appear in local media.

However, a lot of medical professionals advised against giving up zero-COVID too quickly. Some people are concerned that if the zero-COVID policy were abruptly abandoned, the population would be especially vulnerable to a “tsunami” of illness and death due to years of lockdowns and quarantines, as well as indigenous vaccines that have experienced poorer adoption and efficacy than abroad.

After the news conference on Wednesday, Ryan told the AP that “[there is] just not adequate protection in a population as huge as China, with so many vulnerable people.”

The question remains as to whether or not sufficient vaccination can be carried out in the upcoming week or two weeks to truly lessen the impact of the second wave and the strain on the health system. “Vaccination is the escape plan from omicron,” he stated.

Two weeks following the nation’s policy U-turn, news and media from China appear to confirm such cautions. Official records claim that there have been very few COVID-19 infections and fatalities, while local investigators are describing a totally different picture.

Selina Wang of CNN reported yesterday from the Chinese capital that “It’s not just in Beijing.” Social media depicts overflowing crematoriums and funeral homes across the nation.

Long lineups are building outside of hospitals across the nation, she added. And when she inquires as to how many patients were passing away from the illness, a hospital employee replies, “Yes, every day.”

Only time will be able to determine the true effects of the nation’s rollback of its COVID-19 policy, however, since official figures continue to lag well behind real-time case counts in China as well as around the rest of the world. One thing is for certain, though: COVID-19 isn’t going anywhere anytime soon as omicron spreads wildly around the world and more mutant forms keep evolving.

As long-time IT enthusiasts, gamers and gadget fanatics, Mark and I have been working in the industry for a long time and we both have a vast experience in dealing with smartphones, tablets, PC and console hardware and everything tech-related. My list of industry insiders is long-enough to allow me to get insights into what's going on in the technology field and provide my readers with interesting and timely updates. I focus on brief, to-the-point reporting, keeping the "bla bla" to a minimum and making sure my readers get easy access to important information and updates. I mainly specialize in Android-based mobile devices, leaving iOS and Apple devices in Mark's capable hands.
Previous Russia may launch a brand-new spacecraft to return the astronauts from space
Next Here’s how clinical expertise may be incorporated into the business models of digital health firms