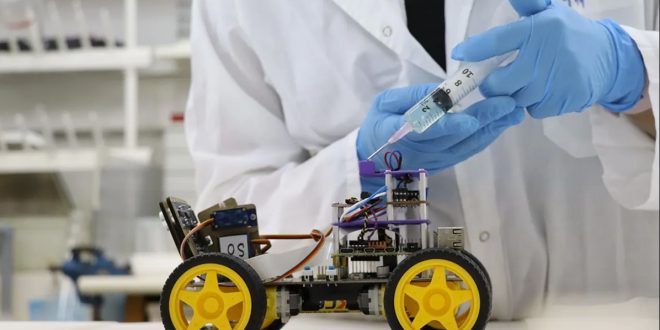 Use of a locust antenna to create a robotic sniffer dog

The ability of the natural world, whether it be dogs or ants, to detect diseases and a wide range of chemicals is still unmatched, despite extensive research into the development of electronic sensing devices that can detect scents better than anything biological. A new biohybrid sensing device has thus been developed by scientists by fusing electronics with the olfactory abilities of the insect kingdom.

The team at Tel Aviv University has developed a robotic device that can distinguish between eight different pure odors and two mixtures using electroantennogram (EAG) technology, artificial intelligence, and the antenna of the desert locust (Schistocerca gregaria).

The main olfactory organ of the desert locust is a highly sensitive antenna, which houses more than 50,000 olfactory receptor neurons. A single antenna was taken out of the locust and placed in an antenna holder that had been specially made and filled with conductive gel. Throughout the experiment, filter paper was sprayed with eight different odors. The olfactory receptor neurons in the antenna were able to respond to the various odors by sending out distinct electrical signals. After that, the team captured the electrical signal generated by the antenna in response to various smells and trained a machine learning algorithm to distinguish between them.

“We connected the biological sensor, exposed it to various smells, and recorded the electrical activity that each smell caused. We were able to identify each scent at the level of the insect’s main sensory organ thanks to the system. The second step involved using machine learning to compile a library of smells, according to paper author Professor Yossi Yovel.

The researchers claim that their biohybrid sensor is 10,000 times more sensitive than current purely electronic devices. They intend to improve their robot so that it will eventually be able to locate the smell’s origin in addition to identifying it.

“We should utilize nature because it is far more advanced than we are. Other senses, like sight and touch, can be used to apply the principle we have illustrated. For instance, some animals are incredibly good at spotting explosives or drugs; developing a robot with a biological nose could help us protect human life and catch criminals in ways that aren’t currently possible. Some animals are capable of spotting illnesses. Some people can feel earthquakes. The sky is the limit,” declared Dr. Ben Maoz, the study’s author.

As long-time IT enthusiasts, gamers and gadget fanatics, Mark and I have been working in the industry for a long time and we both have a vast experience in dealing with smartphones, tablets, PC and console hardware and everything tech-related. My list of industry insiders is long-enough to allow me to get insights into what's going on in the technology field and provide my readers with interesting and timely updates. I focus on brief, to-the-point reporting, keeping the "bla bla" to a minimum and making sure my readers get easy access to important information and updates. I mainly specialize in Android-based mobile devices, leaving iOS and Apple devices in Mark's capable hands.
Previous Use this always-on VPN to protect your data
Next Following a “network issue,” Microsoft services like Outlook and Teams are once again available