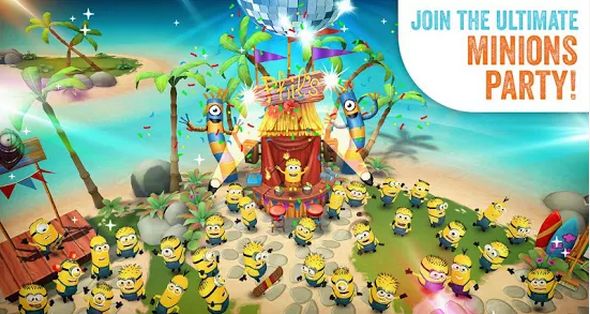 The Minions movie launched this year started a craze over the crazy, yet funny yellow characters in the movie. Once the cinematic creation started being showed in theatres, EA Games quickly announced that it would be making a game based on the movie, but moreso based on the adorable Minions starring in the feature film.

EA had said that Minions Paradise would be launched in the Summer, shortly after the movie premiered, but as you may know, we’ve switched seasons since then and are headed speedily towards Winter, too. EA piced up the slack in the Fall, though, and finally launched Minions Paradise in the Google Play Store yesterday.

Minions Paradise is similar to Fallout Shelter in the way in which players will interact with the game. Players need to care for an entire island of minions and villains and while that might seem like a bit of a childish endeavor, the game is actually really really good. Not just because graphics and effects are on point, but because the game ends up being incredibly complex, with a long and fun gameplay that involves various tasks and mini-tasks that players can do with their minions.

In technical terms, Minions Paradise is a build-harvest game, which is why it can be easily compared to Fallout Shelter. It seems as if these types of games are gaining popularity among Android users, and it’s mostly because the games are free, and progress can be made at your own pace, without having to worry about always getting back to the game.

Players can create their own island utopia in Minions Paradise while building new venues, playing minigames and interacting with both minions and villain characters that were seen in the theatrical movie. The best part about Minions Paradise is that it’s an infinite game, much like Plants vs. Zombies. Updates wil add new stories, tasks, characters and quests, so the gaming experience can forever feel fresh and exciting. You can download Minions Paradise for free from the Google Play Store, but be aware that it’s a freemium game – in-app purchases will be rampant.

Tech Editor with lots of experience with PC hardware components, iOS and Windows-based mobile devices, and love keeping myself up-to-date with any developments in the industry, which I make my job in sharing with you, our readers.
Previous Samsung Galaxy Note 5 vs. Huawei Mate S
Next J.P. Morgan and BlackBerry part ways due to cost cutting