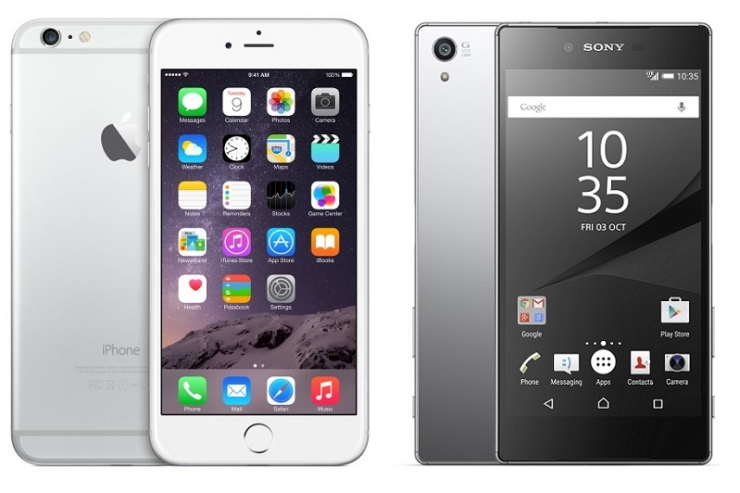 This autumn two of the most anticipated flagship smartphones will be available on the market. One is the highly talked about iPhone 6s and the other is the Sony Xperia Z5. The Z5 was unveiled on the 2-nd of September and is supposed to be available globally in October, while the Apple’s iPhone 6s has been available since the 25-th of September.

These are both impressive devices, beautifully crafted with metal frames that gives a nice look and feel. Some major differences regarding the frame of these smartphones are the fact the the 6S has curved edges while the Xperia Z5 has sharper edges and staying true to Sony’s “Omnibalance” principles has the power button placed on the middle of the frame. Both smartphones come with fingerprint sensors, this being a new feature to the Z family. Like its predecessors the Xperia Z5 is IP68 certified as dust and water proof.

The Xperia Z5 has a bigger display, it’s 5.2 inches with a pixel density of 428 while the 6S has a 4.7 inch display with 326 ppi. Sony’s Xperia Z5 has a better screen to body ration, it is 69.6% while iPhone 6S has a 65.6% ratio. Apple added a new type of input method for their smartphone called 3D Touch. This is a new type of multi-touch technology that measures how hard the user presses on the screen. Pressing harder opens different features and menus on the phone. Both smartphones use scratch resistant glass for their displays.

The iPhone comes with build in internal memory without the possibility to expand using a SD card. There are 3 models available 16 GB, 64 GB or 128 GB and all of them hace 2 GB of RAM. This is a disadvantage compared to the Xperia Z5 that has a 32 GB internal memory, micro SD support up to 200 GB and 3 GB of RAM. The SoC used on the Z5 is the Snapdragon 810 with the powerful Adreno 430 GPU and the Cortex A53 and A57 quad-core CPU. The 6S is equipped with the A9 which has a dual-core 1,84 GHz CPU and the six-core PowerVR GT7600 GPU.

The iPhone 6S runs on the new iOS 9.0.2  while the Xperia Z5 will come with Android Lollipop 5.1.1. There is still work to be done on fixing bugs on both operating systems.

The rear camera is the second new feature of the iphone 6S and the main one for the Xperia Z5. Apple upgraded from the 8 MP sensor to the 12 MP and improved the hardware and software for taking photos and video recordings. Apple also launched the Live Photo feature which records image and sound a few moments before and after taking the actual photo. This results is a cinematic content that is pretty much a short video. When viewing the gallery Live Photos will be still and will show a frame from the middle of the content ( theoretically being the moment you wanted to shoot)  and to activate it you just have to open the photo and press the screen.

The Xperia Z5 also comes with improvements in the camera department. The phone uses a 23MP sensor and the new Hibrid Autofocus. This feature helps the user take a photo faster than other smartphones so far. The camera focuses in 0.03 seconds, so no memorable moment is lost. Sony claims that their new camera is able to zoom up to five times without loosing image quality.The video capabilities are similar, both devices being able to film at 4K resolution. The front cameras are almost identical, both having a 5 MP sensor with full HD resolution. Xperia Z5 brings improvements to audio playback by its new feature the High-Res audio.

One of the most important aspects of a smartphone is the battery. It’s no use to have a device packed full with features if you have to be near a power source all the time. Xperia Z5 comes with a 2900 mAh that should give enough power for at least a full day of mixed use. The iPhone 6S doesn’t score that well then it comes to autonomy, Apple used a 1715 mAh battery. This means that iPhone users can’t go far away from a power source and should always have the power cable and adapter at hand.

Apple’s iPhone 6S slogan is: “The only thing that’s changed is everything”.  In my opinion that is an exaggeration, it’s mostly an improved iPhone 6. The new features that make it truly different from previous versions are the 3D Touch and the Live Photo function. Regarding the material used in the frame, Apple states that the aluminium alloy is like the one used in the aerospace industry. This might just be marketing, emphasizing the fact that it’s strong and will not bend like previous versions.

Sony’s Xperia Z5 slogan says: “Your Story Never Looked So Good”. To me it seems that the focus point of their device is the rear camera. The new Hibrid Autofocus combined with a 25 MP sensor looks promising.

Overall both devices have pros and cons. The 6S is more eye- catching, a lot of time and effort was put in creating a very elegant design that sets it apart from all the other smartphones out there. There is no doubt that the iPhone is the most recognizable phone on the market. Every aspect of its exterior design from the material used to the finishing touches give’s the iPhone premium look and feel. Apple has a history of introducing new technology to the mobile phone industry and with the 3D Touch they succeed in doing it again. This new type of interaction is an easy way to access different options and features of the OS or an app. But besides looking good flagship smartphone should have the most up to date hardware. In my opinion the iPhone 6S falls a bit short of its rivals. It does bring something new to the table, but the battery is a major drawback.

The Sony Xperia Z5 has the hardware needed to be at the top of the market, an impressive camera, the new Hibrid Autofocus, removable micro SD card and a decent capacity on the battery. I only wished Sony would have put a little more effort in the design. It doesn’t have anything to set it apart and looks kind of dull. But maybe future smartphones will come with some improvements in that aria. In my opinion the phone’s capabilities and features make up for the design.

I have always been eager to try out any gadget I could get my hands on. I became a tech journalist so that I could always be around technology and see the newest devices. I use gadgets every day to make my work and life easier. I have enough experience to know If a device is actually improving my activity, offers something useful or new. I will post my honest opinions and judge a device as objectively as I can.
@https://twitter.com/Colin27Anderson
Previous Wooden car wows at Frankfurt auto show 2015
Next iPad Pro vs. iPad Air 2 specs comparison