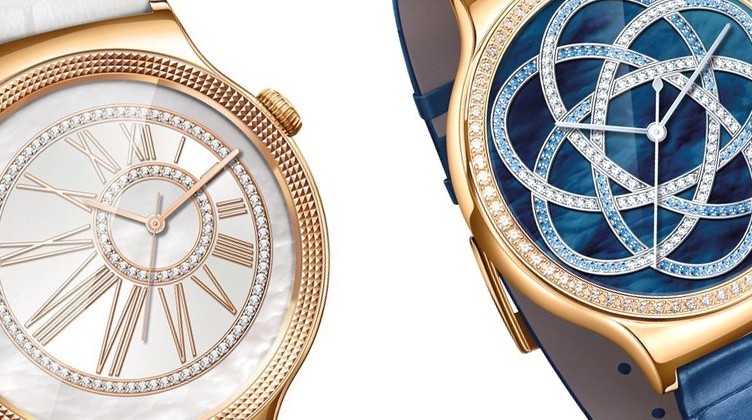 The New Huawei Smartwatches for Women Are the Ultimate Bling

Huawei globally launched the Mate 8 at the CES 2016 this week, but this was not the only device the company had to unveil at the Consumer Electronics Show. The Shenzen, China-based company also showed off two new smartwatches, dubbed the “Elegant” and the “Jewel”. Although these wearables have a number of fitness and health features, they first strike as being some extremely blingy fashion accessories. They are targeting women, so the latest Huawei smartwatches might become popular among the ladies that want a good-looking accessory, that also has some extra features to offer.

Both the “Elegant” and the “Jewel” models come with gold cases and are bedazzled with Swarovski crystals. The watch face of both models is made from Sapphire crystal, so it will be quite resistant to scratches and drops. The Huawei smartwatches have thin wristbands, so they will be perfect to wear at any occasions. Even though the “Elegant” and the “Jewel” smartwatches are intended for women, they are quite large, their round watch faces measuring 44mm in diameter. This might not be good news for the women who have really thin wrists because the smartwatch would look a little strange on them, but it probably won’t have any negative impact on women who like to wear large accessories.

The Huawei smartwatches run on Android Wear software and they are compatible with Android and iOS smartphones also. The new smartwatches will become available sometime in the first quarter of this year in the United States, United Kingdom, Argentina, Australia, Brazil, Canada, Denmark, Finland, France, Germany, Hong Kong, Italy, Japan, Norway, Philippines, Russia, Singapore, South Korea, Spain, Sweden, Switzerland, and the United Arab Emirates. The price of the Elegant model will start from $499 and the Jewel will set customers back $599, so no one could say that Huawei’s new smartwatches are the most affordable wearable gadgets out there.

I have always been eager to try out any gadget I could get my hands on. I became a tech journalist so that I could always be around technology and see the newest devices. I use gadgets every day to make my work and life easier. I have enough experience to know If a device is actually improving my activity, offers something useful or new. I will post my honest opinions and judge a device as objectively as I can.
@https://twitter.com/Colin27Anderson
Previous OnePlus X Ceramic Edition Went on Sale in India
Next SpaceX Plans on Landing a Rocket on a Barge