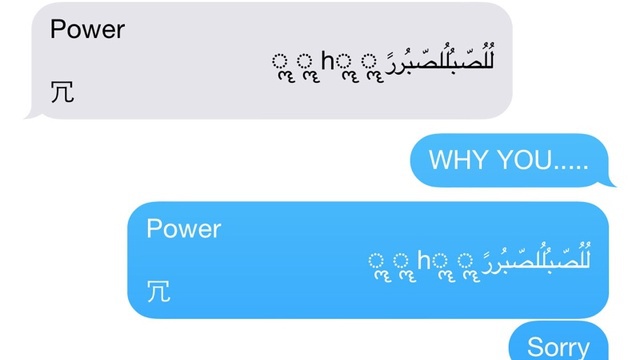 Apple praises iOS as one of the most advanced and stable “no bug” operating systems on the market, but this still has some issues. Many bugs were fixed by iOS 8 updates, until now. One problem started affecting messaging on any device that runs iOS 8.3. The worst part is that its mode of transmission is “Messages” app, which is responsible for SMS and iMessage.

The image attached perfectly describes the situation. If you receive the message written in strange symbols, the phone will quickly restart itself. After the restart, you will not be able to open the Messages application. Somehow, the symbols of the message block access to SMS and iMessage. Fortunately, there are several ways to fix this problem. In the best case, you are only required to respond to the original message, and that only if the “Messages” application is already running when the message is received.

If the phone was locked, it would be necessary to use more advanced features. One solution may be Siri. Using voice commands, you can order virtual assistant from iOS to send a message to your own number and this instantly fixes the issue. Alternatively, any written text in an external application such as “Notes” can be sent as SMS or iMessage using the “Share” function.

Of course, the problem may be fixed by itself when someone else sends a new message from another number. Apparently Messages go crazy when the coded message is the first of the list when the application is started, but it is recovering itself after receiving a new message. According to users who have talked with technical support division within Apple, the company is aware of this issue and will soon release a software update that will correct it.

As long-time IT enthusiasts, gamers and gadget fanatics, Mark and I have been working in the industry for a long time and we both have a vast experience in dealing with smartphones, tablets, PC and console hardware and everything tech-related. My list of industry insiders is long-enough to allow me to get insights into what's going on in the technology field and provide my readers with interesting and timely updates. I focus on brief, to-the-point reporting, keeping the "bla bla" to a minimum and making sure my readers get easy access to important information and updates. I mainly specialize in Android-based mobile devices, leaving iOS and Apple devices in Mark's capable hands.
Previous Asus launching ZenFone Selfie next week
Next Periscope was released as a version for Android