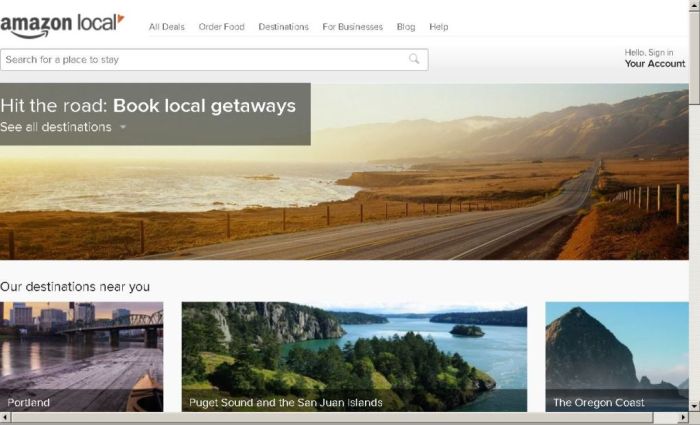 Amazon has shut down its hotel booking service, called Amazon Destinations. Amazon launched the service six months ago and it allowed you to book hotel reservations for a quick weekend getaway. As of yesterday Amazon has announced that its Destinations service would be discontinued. Naturally the story first broke ground in Amazon’s home city of Seattle, in the Seattle Times.

Amazon’s hotel booking service was available only in Seattle and New York at the beginning but it quickly expanded to include more cities, 35 according to Amazon. The Destinations service was mostly aimed at people looking to get away for a weekend at a hotel near their place of residence.

Amazon also had an Amazon Local service which offered customers discounts on hotel reservations. Back when it was first announced the service was marketed as a way to formalize the relationship between the hotels and the consumer by offering a more expansive list of hotel deals. The service promised that it was offering full booking prices and was not just out to fill rooms at the last minute.

The hotels that Amazon was offering discounts on through the Local service were picked from the Destinations line-up. With the closing of its hotel booking service Amazon also announced that it would no longer offer discounts and deals through the Local app. Customers were told that they would have to take no action after the closing of the Destinations service as all bookings and reservations would be honored by the hotels.

Amazon has not announce what motivated this move, but it’s safe to assume that the Destinations service was not doing well with customers. Some say that Amazon was doomed to fail because they were trying to break into a market that was already oversaturated. Either way this probably won’t be the last time Amazon tries to expand its services into other areas.

I'm very curious when it comes to technology. I enjoy tinkering with entertainment and communication gadgets.
Previous Apple to pay damages in lost patent case against WARF
Next Surface Book Sold Out Before Launch Date