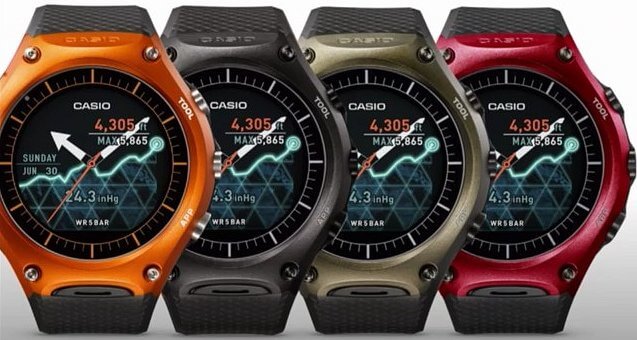 Every major watchmaker has already launched or is currently working on a smartwatch because this wearable is rapidly taking the place of regular timepieces in our lives. Casio is no exception since the company just launched the WSD-F10. The Casio smartwatch impresses with a battery that is said to be able to ensure up to 30 days of battery life and a great design that clearly shows that the smartwatch was created with outdoor activities in mind. Don’t expect it to be affordable, it seems that the new wearable will set you back $500. It will become available sometime in April in the US so you still have the time to save some money until then because it may be worth every cent.

The design of the Casio smartwatch is modern and sporty, and the gadget is waterproof and shockproof according to US military MIL-STD-810 standards. Users will have no problems in water that is up to 50m deep, and dropping the smartwatch on rugged surfaces won’t cause any serious damage either. These are the features that truly make the Casio smartwatch a wearable that is appropriate for outdoor activities. Users will find three buttons on the side of the watch case, which will allow them to turn their smartwatch on or off and activate or control the app on their smartphone or access the data on the watch. The device runs on Android Wear, so users will be able to enjoy everything the operating system has to offer.

The Casio wearable has a compass, a sensor that monitors air pressure, one for altitude and an accelerometer. The watchmaker’s app that you can use on your smartphone is able to let you know when the weather conditions are perfect for your intended activity, so the smartwatch can prove to be extremely useful. One thing that is quite surprising is that the Casio smartwatch doesn’t feature a heart rate monitor, and it doesn’t offer GPS connectivity either. These features are present in the majority of smartwatches, and no high-end wearable lacks them, so this could be a turnoff for some of the potential users.

The Casio WSD-F10 has two screens, a color one, and a monochrome one. The monochrome screen can be turned on with the “Timepiece” function, and when it is activated, the smartwatch seems to turn into a regular timepiece with no extra features. While the smartwatch will only last up to 24 hours on a single charge with the color screen on, when the monochrome screen is activated, the gadget can last for up to 30 days on a charge, which is quite amazing.  Even though the Casio gadget is not quite affordable, it could be the perfect wearable for those who are active and spend a lot of time outdoors.

I have always been eager to try out any gadget I could get my hands on. I became a tech journalist so that I could always be around technology and see the newest devices. I use gadgets every day to make my work and life easier. I have enough experience to know If a device is actually improving my activity, offers something useful or new. I will post my honest opinions and judge a device as objectively as I can.
@https://twitter.com/Colin27Anderson
Previous Sony Xperia Z5, Z5 Compact Go on Sale February 7 in the US
Next Amazon Prime Membership Now Only $73