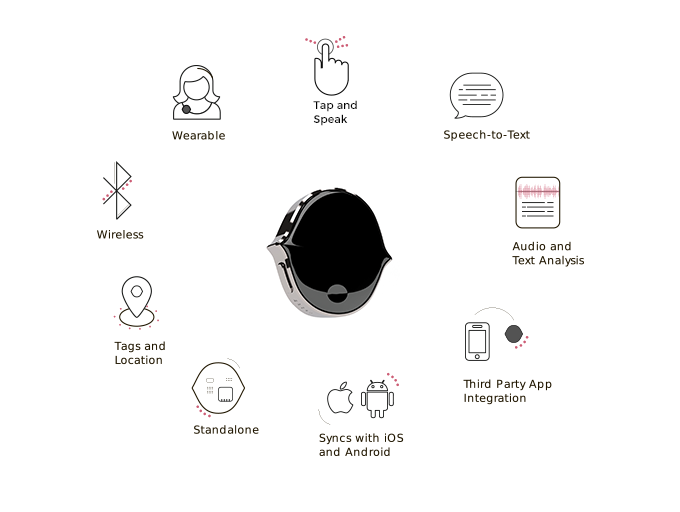 Senstone is the Intelligent Way to Take Notes on the Go

The majority of people constantly take notes. Some need them for work, others make grocery lists, or take to-do notes. In order to do this, until recently we needed pen and paper, or at least a smartphone or a tablet. Now, thanks to Nazar Fedorchuk and his Senstone team, things will become a lot easier. Senstone is a piece of jewelry at first sight, but it actually is an intelligent voice recorder. Users can wear it pinned to their clothes, their collars, or even as a pendant. When the device is turned on, it records what people say. This would make it a good voice recorder. However, this gadget can do even more. It automatically converts your voice notes into text and organizes them for easy access.

The gadget is the object of a Kickstarter project. Given the fact that it already managed to raise more than 300% of its initial goal, it’s safe to assume that it will soon become available for the masses. It’s no wonder that the project is a success story. the device looks great, it’s easy to use and it offers the possibility for users to easily take notes, even when they normally couldn’t. Users can record their plans or to-do lists even when driving, hiking, or doing other things. They only need to turn on the device and say whatever is on their minds. The voice recorder then syncs all audio and text notes into the Cloud.

When users don’t have a Wi-Fi connection nearby, they can still record up to two and a half hours of audio that is stored on the device. When the user gets back in range, the device syncs the notes in the cloud. This way, it is useful for any occasion and users can benefit from it even on a mountain top. After all, some of our best ideas come to us when we are out and about. The gadget can also come in handy in business meetings. When everything that is said is also recorded, nothing gets forgotten. Even more, it’s quite easy to have a transcript of a meeting in no time. It even allows users to dictate messages and then sends them as texts.

Those who would like to keep track of their dreams can do it with this little device. The Senstone listens to them when they sleep and is just a finger snap away from recording the details of their dreams while they still remember them. Users don’t even have to wear the gadget for this, they can turn on the device by snapping their fingers. At this point, this feature only works when the voice recorder is placed on the charging dock.  Even though at some point the device will become available globally, at this time it’s only able to recognize select languages. These include Arabic, English, Mandarin, French, German, Italian, Japanese, Polish, Russian, Spanish and Ukrainian. If you speak one of these languages, the Senstone could become your favorite intelligent voice recorder.

The intelligent voice recorder also has a display that consists of 17 white LEDs that inform and informs users of key activities such as starting and ending a recording, synchronization, battery status, and charging. The battery of the gadget can offer up to 4 days of use on a single charge. Thanks to its flash memory, it supports at least 100,000 recording cycles. The cloud software platform the gadget works with converts voice memos into text, extracts keywords, to-dos, and analyses your speech patterns.  Then, it organizes the memos by different criteria. The retail price of the device will start at $145. However, those who back the Kickstarter project can get one for u to 30% less.

Hi fellow tech enthusiasts! I'm Mary. I enjoy writing about tech, but I love tinkering with gadgets more. If it can take a screwdriver, leave it to me to fix it (or brick it). I'm passionate about Android and I'm all in for Google, but I don't stray from Apple nor Windows, so I'll keep you up to date on everything mobile (or stationary).
Previous SK Telecom Will Unveil 360 VR Live at MWC 2017
Next RollerCoaster Tycoon Touch Now Available on iPhone, iPad and iPod Touch