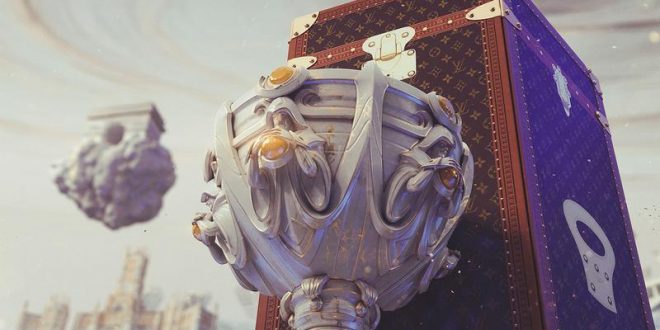 Esports have become extremely popular in the past few years. This is reflected by the fact that major companies started to invest in esports tournaments. Up until now, the investors were mainly tech companies and automotive companies. However, it seems that other businesses are stepping in the game too. The latest addition to the lineup of famous brands to share their names with esports tournaments is Louis Vuitton. The globally known fashion company collaborates with Riot Games for the League of Legends Championship. While there might be more to the partnership, one of the most interesting facts about is that Louis Vuitton will design the special travel case in which the League of Legends Championship winners will be able to take their Summoner’s Cup home.

The trophy will be awarded on November 10. The world champions of League of Legends will get their prize in Paris, France. Naturally, the Louis Vuitton travel case will be stylish, like everything else the company designs, but it will also have high-tech elements inspired by the League of Legends world. While the travel case for the Summoner’s Cup is the most impressive of the items designed by Louis Vuitton as a part of this partnership, there are other ones too participants will surely appreciate. According to the partners, the fashion company also designed unique champion skins and a capsule collection.

The League of Legends Championship will kick off on October 2 and will go through several phases before the awarding ceremony which will take place in Paris on November 10. The different stages of the tournament will take place in Berlin, Madrid, and Paris. 24 teams from 13 regional leagues will compete for the supreme title and, implicitly, the Louis Vuitton travel case. The fashion company didn’t really enter the esports world up until now, but it is known to be a partner of different physical sports, as they did design similar travel cases for trophies in the past. The FIFA World Cup and the Rugby World Cup are two of the ones that get to travel in such travel cases.

As Michael Burke, Chairman and CEO of Louis Vuitton presented the situation: “The League of Legends World Championship is not only the climax of the tournament: it’s where the world of sports and entertainment come together in celebration of new legends to be born. Louis Vuitton has long been associated with the world’s most coveted trophies, and here we are today, alongside the Summoner’s Cup. We are thrilled to be part of such an iconic event.”

This is yet another sign that esports are becoming more and more popular nowadays. There aren’t only new investors, but there are also new sports to join this world. Tennis, for example recently became a part of the esports universe. Football tournaments have been around for a while now in this field, just like basketball and ice hockey tournaments. We expect to see other sports joining the fun too. Some people like to play these games, others like to watch them and a third category likes to bet on them. You can even get tennis betting tips online so why wouldn’t we see people play the game online? We are living in a tech world after all.

I'm very curious when it comes to technology. I enjoy tinkering with entertainment and communication gadgets.
Previous How to Recover Data From a Failed Hard Drive on Your Mac
Next What You Need to Know About Using Public Wi-Fi