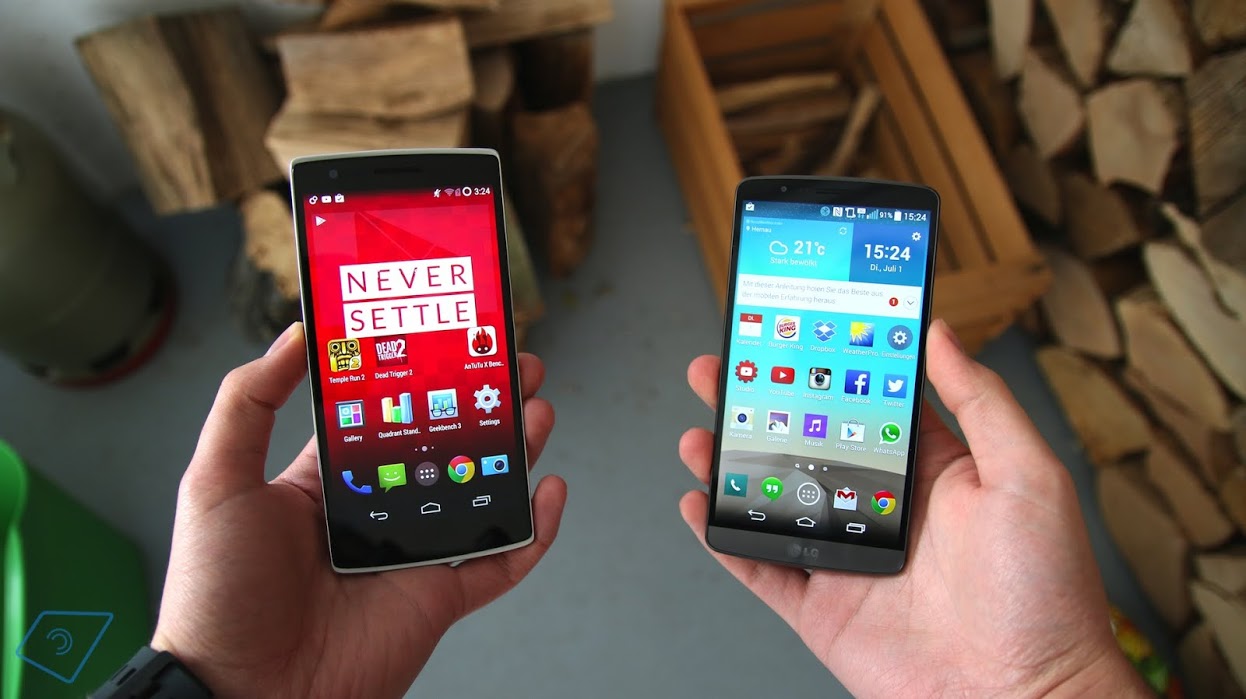 In the spirit of the OnePlus 2, let’s compare how it’s predecessor, the amazingly affordable “flagship killer” OnePlus One, compares to it’s competitors, particularly LG’s G3. Interestingly enough, the two smartphones possess similar specs in terms of processing power, camera, and LCD Display. However, there are a couple of specs that set them apart. Let’s dive in and take a look.

When it comes to the design of the two smartphones, they possess the same thickness, ergonomic buttons, but the LG G3 is about 7 mm shorter and 1 mm narrower than the OnePlus One. At the same time, the G3 is 13 grams lighter, with a comfortable curved back, and although it’s brushed metal look is aesthetically appealing, it can be a little slippery to hold. Compared to the OnePlus One, the One has a “premium” feel, especially with the logo placed neatly in the middle of the back. Upon holding the device, it has sort of a “soft touch” to it.

The LCD display on both devices is 5.5 inches. But, when it comes to resolution, the OnePlus One’s 1080p has a ppi of 401, with the G3’s Quad HD bolstering a thick ppi of 534. While this may seem like a huge difference on paper, the quality isn’t that much different in action. Now, the interfaces are a little different: the LG G3 has a customizable user interface, while the One does not. When it comes to colors, some critics panned the smartphone for lacking in contrast and that the colors aren’t vivid, whereas some praised the G3 for being able to differentiate between lighter/darker colors.

Performance between both devices is surprisingly similar. Both smartphones have a Quad-core 2.5 GHz CPU, with a Qualcomm Snapdragon 801 processor. Before the G3 received it’s updates, some users pointed out there was noticeable lag when using the device, but since then, everything has been smooth.

Sound quality is dependent on how picky you are when it comes to listening to videos without a headset. The OnePlus One has two powerful speakers that are difficult to muffle, while the LG G3 has one speaker on it’s base which unfortunately can be muffled).

Camera-wise, both are 13 megapixels and both are capable of 4K video. However, the LG G3 has it’s own laser-guided focus, which can churn out some very nice photographs.

What do you think of these smartphones? Which would you prefer? Would you argue that the devices aren’t that similar? Let me know in the comments below.

Smartphones, tablets, laptops, drones, smartwatches my goal is to review them all.
Previous A Foldable Samsung Galaxy S7 Might Be on the Way
Next OnePlus 2 vs. Samsung Galaxy S6: Does OnePlus Have a “2016 Flagship Killer?”