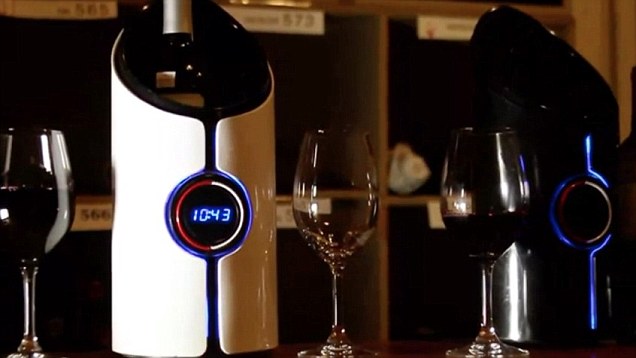 Most people can’t afford bottles of aged, expensive wine. Unless you’re earning big or are extremely passionate about what wine you sip in the evenings, you’re likely going to pick your favorite bottle from the nearby supermarket. But what if there was a way to turn common, fresh wine into wine that’s decades old in just a few minutes? That’s what the Sonic Decanter is all about. This particular gadget has emerged on Kickstarter and is currently looking for backers. The Sonic Decanter has a set target of $85,000, which it has just reached (meaning the project is now funded), with 6 more days to go and a lot of support potentially to come.

The idea behind the Sonic Decanter is relatively easy to understand – the device emits ultrasounds which alter the molecular structure of the wine, simulating the process of passing time. In 20 minutes, the Sonic Decanter can age a wine that would normally change to the same structure in years. Sounds great? It actually is. The developers have shown that the device works on almost any wine (be it red, white and rose), with the exception of sparkling wine that contains CO2. In any case, we’re here to talk technology, not beverages, and we’ll leave that to the wine connoisseurs. Here’s the opinion of one such connoisseur, after testing the Sonic Decanter, just for good measure!

There’s a lot of hype around the Sonic Decanter as of late. Skeptics have long been silenced, and the tech industry is definitely starting to pay attention to the project. The Sonic Decanter even looks surprisingly good, and comes withe Bluetooth support, meaning that you can use your smartphone to control the device and set a 5, 10, 15, 20 or 25 minute timer on it. The app will then alert you when your wine is ready to take the edge off a long and stressful day. The Decanter helps regular or cheap wine develop a more intense flavor, and is extremely easy to use. The device will be released in 2015, is already patented, and will retail for $250 (which is not a lot, considering that an above average bottle of wine can easily amount to that). Offering a donation of $199 right now (via Kickstarter) will get you a Sonic Decanter once the device is launched, meaning you can sort-of pre-order it now for a 20% discount. If you want to read more about it, take a look at the Decanter’s official Kickstarter page, or check out the video above!

Tech Editor with lots of experience with PC hardware components, iOS and Windows-based mobile devices, and love keeping myself up-to-date with any developments in the industry, which I make my job in sharing with you, our readers.
Previous BitTorrent challenges iTunes by introducing paid bundles
Next iPhone 6 Plus review