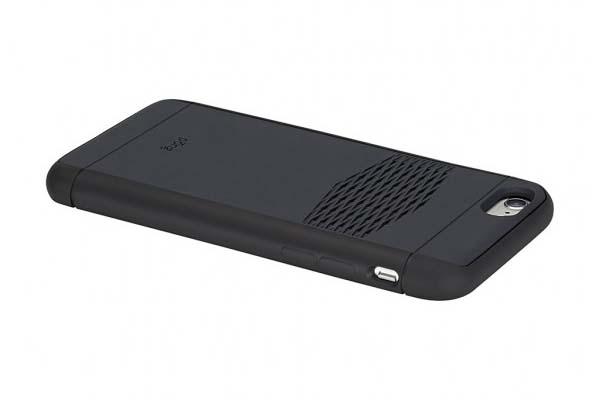 Ever heard about smartphone cases that decrease radiation levels that could potentially be harmful to users? If not, you’ll likely want to know about Pong, a company that specializes in building cases for smartphones for that exact purpose. That being said, Pong is owned by parent company Antenna79, which has just revealed a new type of iPhone 6 case that does an entirely different thing. Their new cases, called Reach79, are designed to primarily boost cell reception, promising to double your signal strength. The cases work due to an embedded, gold-plated antenna, which greatly increases cell reception.

These cases don’t come cheap though. Should you be needing the extra juice in low-signal conditions, be prepared to shell out $60 for the iPhone 6 version, and $70 for the iPhone 6 Plus variant. We couldn’t get our hands on a case just yet, so just how good the signal boost is remains to be seen, but according to accredited testing facility CETECOM, the iPhone 6’s signal can be boosted by an average of 1.6 times with the Reach79 case, and can even go slightly above the 2x figures promised by Antenna79. Whether or not this boost is enough to warrant a purchase is entirely up to you, but if having signal everywhere at any time is important to you, you might consider the Reach79. “Powered by patented antenna technology, Reach79 cases are the first performance-enhancing smartphone cases designed for speed. Each case is embedded with a micro-thin, gold-plated antenna that works to increase your smartphone’s signal strength so your phone can do more for you.” says Antenna79 CEO, Mr. David Vigil.

Of course, boosting signal reception isn’t the only thing the Reach can do. It’s also designed to protect your iPhone from taking damage, with a supposed 6.6 feet drop protection. It also aims to increase 3G and 4G data transfer rates (also due to better reception), while also providing some customization features. The Reach79 is currently available in black, but expect more colors, such as vivid red, as showcased by CNET. The efficiency of the Reach79 might also be dependent on your carrier, location and your iPhone 6 or 6 Plus itself.

As long-time IT enthusiasts, gamers and gadget fanatics, Mark and I have been working in the industry for a long time and we both have a vast experience in dealing with smartphones, tablets, PC and console hardware and everything tech-related. My list of industry insiders is long-enough to allow me to get insights into what's going on in the technology field and provide my readers with interesting and timely updates. I focus on brief, to-the-point reporting, keeping the "bla bla" to a minimum and making sure my readers get easy access to important information and updates. I mainly specialize in Android-based mobile devices, leaving iOS and Apple devices in Mark's capable hands.
Previous Android to make a significant appearance at CES 2015
Next LG G Flex 2 revealed at CES 2015, brings curved display and improvements