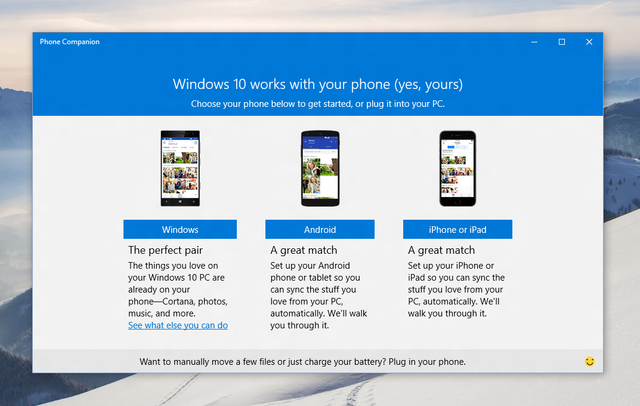 Digital assistant Cortana has been launched by Microsoft on Windows 8.1. This software is competitive on the market, even though there are much more famous solutions like Siri or Google Now. Cortana’s regional and linguistic availability are limited but the good news is that, according to Microsoft’s today announcement, Cortana will be available on Android and iOS, the rival operating systems. Their product will make part from a bigger software package which will offer other interconnection services as well.

According to an article that was published today on the company’s official blog, Windows 10 OS will come accompanied by an application called Phone Companion. That app will ease installation and setup for Microsoft applications on all user phones. If the user uses Windows Mobile Phone or Windows 10, all applications will be already pre-installation and set, however Phone Companion will offer compatibility with Android and iOS platforms.

Among the applications included, Phone Companion will offer multiplatform already known products such as Office, OneNote, Outlook, Skype and OneDrive, but there are also two new ones. The first of this is an application that will allow you to play online music which is stored on OneDrive. The future Xbox Music will use a special streaming option that Microsoft has announced it a few months ago but it did not activate it yet for all accounts.

The second novelty is even digital assistant Cortana, which will be available on Android and iOS platforms. As the product is already present on Windows Phone 8.1, Cortana will offer voice control, will allow interaction with calendar, To Do lists and other software modules . Cortana will also synchronize settings between terminals through Notebook. This app designed for Android and iOS app will not, however, be activated by using the phrase “Hey Cortana,” and it will not alter the settings of the operating system.

As long-time IT enthusiasts, gamers and gadget fanatics, Mark and I have been working in the industry for a long time and we both have a vast experience in dealing with smartphones, tablets, PC and console hardware and everything tech-related. My list of industry insiders is long-enough to allow me to get insights into what's going on in the technology field and provide my readers with interesting and timely updates. I focus on brief, to-the-point reporting, keeping the "bla bla" to a minimum and making sure my readers get easy access to important information and updates. I mainly specialize in Android-based mobile devices, leaving iOS and Apple devices in Mark's capable hands.
Previous Cortana will be a cross-platform companion for iOS and Android too
Next Soon you will not be able to access Youtube from some devices