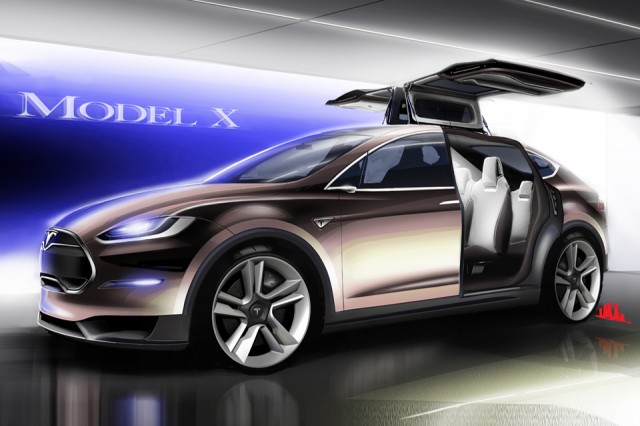 After the Tesla Roadster and the Model S a new magnificent electric vehicle has hit the road after being unveiled last night. The Model X was announced in 2012 and was finally released on 29 October by Tesla Motors. This is one of the world’s first all- electric SUV’s which in itself would make it amazing. But this is not the only amazing thing about the Tesla Model X. It’s design is great and it’s power is also mesmerizing. And for now, there are only 6 people in the world that actually have the keys to one of these Model X vehicles.

The Model X impresses at first glance with its futuristic design and the so- called falcon doors. Not only do they open like a bird’s wings, upward, they are also smart. These doors are equipped with sensors in order to determine the space they have to open. This way car owners will never have to fear hitting something with the car’s doors. Of course, the driver’s door keeps up with the car’s really high grade of coolness and is able to open on approach and close itself after the driver gets in. Now, who wouldn’t like to have such a driver’s door, specially when carrying something?

The super- smart doors are not the only great feature of the Tesla Model X. It is also a big car, although its volume is not known yet. What is certain is that all of your stuff will fit in this ginormous vehicle, alongside the 7 passengers it can carry. In case you would like to carry your bikes and they don’t fit (naturally) in your Model X SUV, Tesla has the solution: the accessory hitch that can hold four bicycles or six pairs of skis. So no worries, you don’t have to leave anything behind.

Another awesome thing about the Tesla Model X is the monopost design of the second- row seats. These can be individually adjusted, so every single passenger  will sit comfortably. The windshield of the Model X SUV is quite large, so it creates the impression that you are travelling in a convertible. That must feel nice, compared to other SUVs. The inside of the Model X is covered in white leather which will surely ensure car owners comfort on the road. And it also looks really nice. The sound system is quite powerful, but that does not come as a surprise, after all it is an electric car. It is in itself a huge gadget that gets you around the world. Silently.

The Model X SUV comes with a 90 kilowatt-hour battery and dual motors. This is known as the 90D. There is also a more powerful version, the P90D, which will help the Model X a quarter-mile-run in 11.7 seconds. That is pretty amazing, you have to admit it. The Model X accelerates to 60 mph in only 3.2 seconds, and that is pretty amazing too for an electric vehicle. The Tesla Model X hits its speed limit at 155 mph, but that is quite OK for an electric SUV. The 90D version is able to go 257 miles on a single charge, while the P90D can go 250 miles on a charge. Both versions can quick charge at any Tesla station. As far as the price goes, it is a little high, beginning from $132,000 for the 90D version and $142,000 for the P90D. It’s not affordable to everyone, but it seems to be worth every penny. We are sincerely impressed by the detailed work of Tesla, who managed to reinvent the family car.

I have always been eager to try out any gadget I could get my hands on. I became a tech journalist so that I could always be around technology and see the newest devices. I use gadgets every day to make my work and life easier. I have enough experience to know If a device is actually improving my activity, offers something useful or new. I will post my honest opinions and judge a device as objectively as I can.
@https://twitter.com/Colin27Anderson
Previous Surface Pro 4 Release Date Approaching
Next OnePlus Mini launch pegged for October