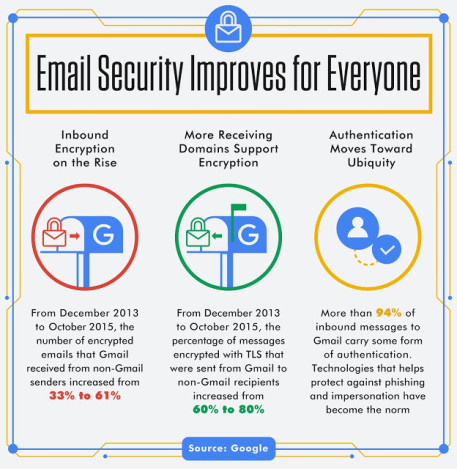 The research team observed that there was an increase in email security over the past two years. The number of encrypted emails received by Gmail users from other email service users almost doubled, rising from 33% recorded in December 2013 to 61% in October 2015. In the same time frame, the percentage of messages encrypted with TLS that were sent from Google’s email service to other recipients increased by 20%, now recording 80% instead of 60% in December 2013. Authentication is also taken more seriously by the majority of email providers, now 94% of inbound messages to Google’s email service carry some form of authentication. All of these combined result in a more secure online environment. More and more email users are being protected from phishing and impersonation now, making it less possible for them to become victims of a cyber attack.

Now the Google team is working on a system that is meant to alert email users when they receive an email that got to them through insecure connections. This would be great since unencrypted emails are great targets for cyber attackers. By knowing that you got such an email you can choose not to open it and thus you won’t become a victim. The company didn’t mention a specific date when the notifications will start rolling out, but they did say that they will become available in the next few months. We hope that the efforts of Google and their partners will help keep us safe and that email security will get better and better every year.

I have always been eager to try out any gadget I could get my hands on. I became a tech journalist so that I could always be around technology and see the newest devices. I use gadgets every day to make my work and life easier. I have enough experience to know If a device is actually improving my activity, offers something useful or new. I will post my honest opinions and judge a device as objectively as I can.
@https://twitter.com/Colin27Anderson
Previous Google Play Books – receives a comic-book friendly update
Next Chrome beta for iOS with 3D Touch support launched by Google