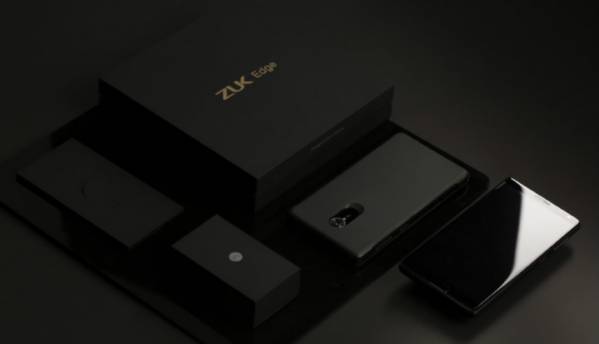 Whenever we see the word “Edge” in the name of a smartphone, we think of a curved display. The next Edge device to be launched is the Lenovo ZUK Edge.  A live image of the handset recently surfaced on the web, and to our surprise, it depicts a device with a completely flat screen. Why Lenovo chose this particular name for its handset is a mystery. Everyone expected the ZUK Edge to be launched on December 7. This date came and went, but the Edge did not appear. Now, according to a press invite coming from ZUK, the upcoming smartphone is scheduled to be launched on December 20.

Along with the press invite came the leaked image of the handset. We can see both the front and the back panel of the device in its full glory on this image. What seems to be certain is that the screen of the Lenovo ZUK Edge is as flat as it gets. So if you were expecting a handset with a curved display, you will definitely be disappointed by the upcoming Lenovo smartphone. Aside from the fact that its name doesn’t reflect the reality behind the design of the handset, the ZUK Edge seems to be quite an impressive gadget.

Under the hood, according to Playfuldroid, it’s highly likely there is a Qualcomm Snapdragon 821 chipset. The handset includes 4GB or 6GB of RAM alongside 32GB, 64GB or 128GB of internal storage. Even though the specs are almost worthy of a high-end smartphone, the price of the handset is rather low. As a matter of fact, the $390 price tag of the device makes it the most affordable one that has a Snapdragon 821 chipset. In other words, those who wish for a powerful smartphone for a low price might just get what they want. As I already mentioned, the Lenovo ZUK Edge will launch on December 20, according to the press invite. There are only a few days left until then, so we will know a lot more about the device soon.

As long-time IT enthusiasts, gamers and gadget fanatics, Mark and I have been working in the industry for a long time and we both have a vast experience in dealing with smartphones, tablets, PC and console hardware and everything tech-related. My list of industry insiders is long-enough to allow me to get insights into what's going on in the technology field and provide my readers with interesting and timely updates. I focus on brief, to-the-point reporting, keeping the "bla bla" to a minimum and making sure my readers get easy access to important information and updates. I mainly specialize in Android-based mobile devices, leaving iOS and Apple devices in Mark's capable hands.
Previous LG to Unveil New K-series, X-series and Stylus Smartphones at CES 2017
Next BlackBerry Smartphones To Be Manufactured by TCL Communication