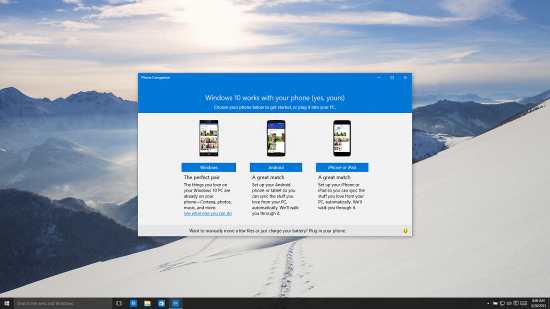 Microsoft is fighting hard to become the most important player from the IT market, from all points of view. First they made open-source .NET, the free Visual Studio and they announced that anybody could compile the code for Android (Java) or iOS (Objective-C) directly for Windows 10.

In other words, there are great chances for Microsoft to have, over an year or two, multiple better applications in Store than iOS and Android together.

But Microsoft’s efforts do not stop here. They continue to build applications in their own backyard for iOS and Android mobile platforms. We must not forget that they are working hard to the Office application and that they run periodic updates to the entire suite of applications on both operating systems. A huge effort that is worth all the money.

Very recently they have already announced that they will have one version of Cortana, their virtual assistant, for both operating systems: Android and iOS. Moreover, Windows 10 will help you connect any device with it via Phone Companion application.

The natural question we have to put ourselves is what comes next from Microsoft? Will they do Windows 10 for Android? Will this be available in Play Store? Yes, it sounds pretty funny when you think about it but it is surely not the case. Microsoft is as powerful as never, they have money and engineers that want to prove they do the best software. I am just a little bit afraid for the competition. We have to have competition, otherwise the quality and the price of OS’s or apps will suffer. I am personally glad that there is more compatibility between different OS software and OS based devices but they should remain as individual as they were before. Things are far more complex than we can imagine but I hope the near IT future will not mean only one player to dominate the most of the market.

As long-time IT enthusiasts, gamers and gadget fanatics, Mark and I have been working in the industry for a long time and we both have a vast experience in dealing with smartphones, tablets, PC and console hardware and everything tech-related. My list of industry insiders is long-enough to allow me to get insights into what's going on in the technology field and provide my readers with interesting and timely updates. I focus on brief, to-the-point reporting, keeping the "bla bla" to a minimum and making sure my readers get easy access to important information and updates. I mainly specialize in Android-based mobile devices, leaving iOS and Apple devices in Mark's capable hands.
Previous SwiftKey for Android – a new design and improved functionality
Next Xiaomi Mi 5: A Rising Competitor