Get a smart watch for less than $30 in flash sale

Wearables are on the rise and people seem to be more and more interested in them. However, prices for a smart watch from mainstream companies can go as high as $500 a piece, which is outrageously expensive for an early adopter or first-timer, or someone who loves gadgets but doesn’t think they’re worth that much. Starting tomorrow, September 15, you can get your hands on a smart watch for less than $30 a piece if you participate in the flash sale that Everbuying is hosting. 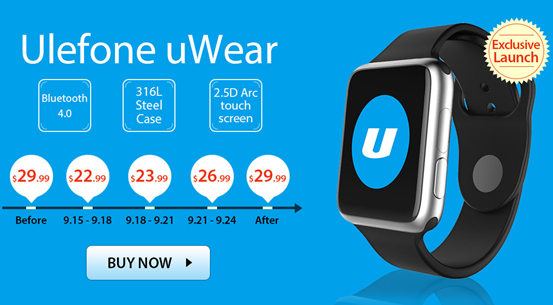 Besides the Ulefone UWear, you will also be able to buy the Mifone W15 smart watch for the same $23 price on the first day. This smart watch is similar to the Ulefone one in design and functionality, but it adds a sapphire glass touchscreen to the mix for that extra premium protection. This one also has adaptive brightness built-in, which is rare with these wearables. This one will cost only $10 on the first day of the promo, and $20 on the last, if stocks last.

The famous Zeblaze Crystal is also part of the Everbuying smart watch sale, and it might be the best deal of them all. For $55 on the first day of the promo, the Zeblaze Crystal adds a beautifully sleek design, Bluetooth, an optical heart rate monitor, a leather strap and of course, a curved display. It also comes with IP65 waterproof certification and is compatible with both iOS and Android smartphones.

Last, but not least, another smart watch that you can buy throughout the festival is the DZ09, a small, yet versatile wearable that comes with its own SIM card slot. It bears most of the features the above mentioned wearables do, but adds a proprietary VGA camera and a SIM card slot to its feature list. It can still work with your phone, but it can also work independently, which is great for outdoorsy people. This one costs only $23 with limited stocks available. So which one would you like?

Tech Editor with lots of experience with PC hardware components, iOS and Windows-based mobile devices, and love keeping myself up-to-date with any developments in the industry, which I make my job in sharing with you, our readers.
Previous iPhone 6S vs Nexus 5 2015: Two upcoming phones that warrant an upgrade
Next 9.7-inch Teclast X98 Pro tablet touts full Windows 10 OS