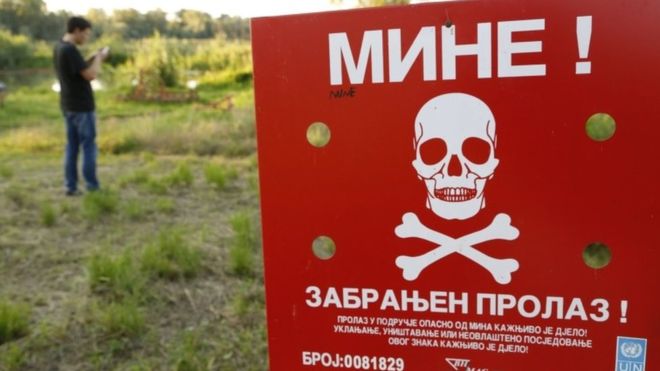 Pokémon Go is not only a mobile app anymore, it is a global phenomenon that has reached every corner of the world through official channels or not. Even though the game has its undoubted benefits, making people a lot more active, it also can prove to be quite dangerous. There were people injured because they were playing the game while driving, but for Bosnian people using this app can be a lot riskier. Even though the war has ended back in the 1990s, there still are landmines all over the territory of the country.

A demining charity, Posavina bez mina, recently warned Pokémon Go players not to adventure in zones where it is known that they could stumble upon landmines. Players could venture in these areas without even knowing while chasing Pokemon creatures, especially the more rare ones, which seem to be the most desired little monsters. Pokémon Go fans would do almost anything in order to catch one of these creatures, even venturing through critical areas. After the war has ended there were over 600 incidents reported concerning landmines, and with the recent game frenzy, it is possible that we will witness a lot more of these all over Bosnia. Players here should be extra careful in order not to injure themselves or others in the process of catching virtual monsters.

The mobile app, developed by Niantic in partnership with Nintendo and the Pokemon Company was extremely well received by players all over the world and managed to become the most downloaded app in less than a week. The game at first released only in select regions, and it still isn’t globally available, but in the areas where smartphone users can’t access the app through official channels, the majority of enthusiasts get the cloned versions of the game. Unfortunately, the majority of these versions are infected with malware, so users can even damage their handsets if they aren’t particularly careful when choosing their source to download from. Everyone is eager to get their hands on the mobile app, but in this case, it is safer to wait patiently for the official version that will eventually become available in the google Play Store everywhere in the world.

Hi fellow tech enthusiasts! I'm Mary. I enjoy writing about tech, but I love tinkering with gadgets more. If it can take a screwdriver, leave it to me to fix it (or brick it). I'm passionate about Android and I'm all in for Google, but I don't stray from Apple nor Windows, so I'll keep you up to date on everything mobile (or stationary).
Previous 7.1sound Mixcder Power Gaming Headset: Review
Next Syllable D700 – practical and stylish sports earphones