Drones are fun gadgets that work on the same principles as helicopters. As their technology progressed so did their capabilities. Modern drones are equipped with powerful electric motors that can lift other various things besides the drone itsself. The flight time of such a gadget varies from 5 to 20 minutes depending on the battery size and the efficiency of the motors. Most drones are used for taking photographs and filming, some come equipped with a video recorder while others offer the possibility to attach a digital camera like a GoPro.

We see drones being used by TV companies when filming an outdoor event, movie productions or in various sports. Some have the option of following a subject automatically. Prices range from under 100$ to several thousands. An expensive drone will give you a bunch a features, a good flight time and high quality images. There are a lot of things to take into consideration when shopping for a drone, like how long do you want it in the air, how much weight can it lift, the quality of the recording, motor noise and so on. Here are a few of the most impressive drones of this year. 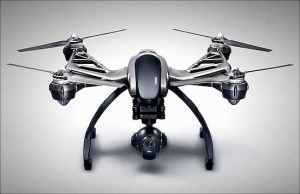 This quadcopter  falls into the category of drones designed for air photography and video recording. Like the name says it comes with a 16 MP camera that can record video at 4K resolution. It can also film slow-motion video, full HD at 120, 60, 50 or 48 fps. The drone also has a microphone that can be turned on or off. The recordings or the still images are saved on a micro SD card. The camera can use an 128 GB card.

It has a built-in 5200 mAh battery that gives 25 minutes of flight time. This depends on weather conditions and weight. The drone weighs aprox. 1.7 kg with the battery and camera. Some features can be controlled from a smartphone after installing the manufacturers app. The drone can send live video to the smartphone, the microphone can be turned on or off.

The Yuneec’s computer can access the FAA’s no fly areas, like airports, where piloting drones is forbidden and can prevent the drone from flying higher 400 feet.

This drone has 3 flight modes. Smart Mode designed for beginners and helps control the drone. The distance from the pilot will be from 26 feet to 300. And the drone will move in the position that the stick is pressed relative to the controller’s position and not the drone’s “nose”. In other words it will consider forward the direction in which the controller is pointing.  The second mode is Angle Mode. This mode is for the more experienced users and allows more control over the drone’s position. It allows the drone to fly at greater pitch angles. The last one is Home Mode, using the GPS when Home Mode is activated the drone heads back to the location from where it took off. Home Mode activates automatically when the drone looses the signal from the controller. 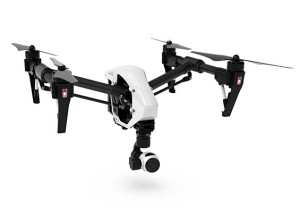 Just like all other recent drones that hit the market the Inspire 1 comes ready-to-fly, this means that no major assembly is needed. The only thing the pilot needs to do is to calibrate the GPS. The 4500 mAh battery gives the drone a maximum flight time of approximately 18-20 minutes. That is a good autonomy taking into consideration that it weighs 2.9 kg. With no wind the drone can reach a speed of about 22 m/s and an altitude of 4.500 m. The only limitation is the transmitter’s range, 2000 m.

This is a premium gadget, its price is around 3000$. It has a sci-fi design, calculated to be aerodynamically efficient to reduce air resistance. The arms are retractable, when the drone is grounded the arms are in a lower position and act as landing gear and then in flight the rise. This ensures a 360 degrees unobstructed view for the camera.

The camera has a 12 MP sensor and can record video at 4K. Like on other drones the camera is mounted on a 3-axis gimbal that keeps it steady and the horizon level. The DJI Inspire 1 can send live video to a smartphone or tablet giving a first-person view to the pilot.

When using the drone indoors or in other situations where the GPS can’t detect satellites, DJI’s Optical Flow technology uses a specially designed camera and a sonic wave sensor to stabilize it. Other cool features are “Live Map and Radar” which shows the drone’s position on a live map and displays the most recent flight path. When “Dynamic Home Point” is activated the home point is set to the location of the controller and refreshes automatically, so that if you are on the move the drone will know your position and can return to you accurately. 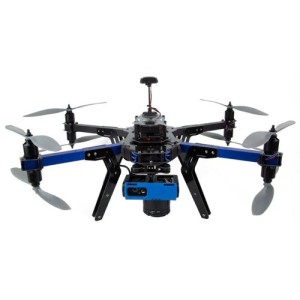 The X8-M is a fairly large Octocopter from 3D Robotics. From the start it’s size and weight are a disadvantage when it comes to autonomy. It’s 10,000 mAh battery can only keep this 3.5 kg drone in the air for about 14 minutes. It’s design is nothing ground breaking and it doesn’t have that sci-fi look we see on other drones.

This drone uses a Canon PowerShot S100 that takes pictures at a resolution of 12.1 MP and records video at Full HD. The camera used is the stock version, no special features were added.

The most interesting feature of this drone is the Pixhawk Autopilot System. Based on the technology for the PX4, ST Microelectronics sensors and NuttX real time OS, Pixhawk provides a computerized brain for this drone. The software is similar to Unix/ Linux and offers a large range of autopilot functions. 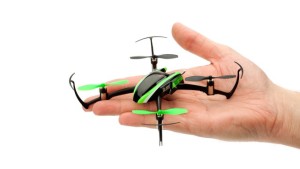 This is a cute little drone, it’s small size give’s it a spy look. It’s small 150 mAh battery gives it an air time of about 4 minutes. It has 2 flight modes, Stability and Agility. Like the names suggest the pilot can choose to control the device freely and perform sharp angle flight. Or turn on the stability features that make the drone feel more rigid, but keeps it stable and helps to get good shots.

The quadcopter is equipped with the Vapor VA 1100 camera. The camera pairs wireless with first person view goggles and sends a live fed  of 720p at 30fps.

For safety the props have a guard so that the drone can be piloted indoors. 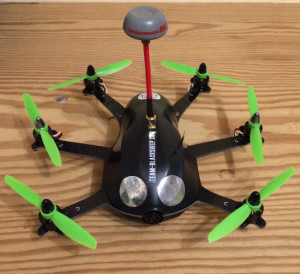 The other drones I talked about are mostly designed to hover and record images fast and in high quality.  This hexacopter has a totally different purpose, it is designed for FPV racing. Even the design of this drone is based on aerodynamic principles and is optimized to reduce air friction and increase speed in forward flight. To achieve this the motors are tilted approximately 10 degrees forward and so the nose is tilted up.  It can reach a speed of 80 km/h and the 1700 mAh can power the gadget for around 10 minutes.

There is the possibility to mount a Mobius HD ActionCam, but the stock drone come’s with the TBS CHIPCHIP V2 camera that film at 600 TVL, meaning 768×494 pixels.

All of these drones are interesting and would be fun to use, but for me, I think that the racing drone would be my favorite one. I can imagine how exciting it would be to race these little things at 80 km/h using the FPV goggles.

I have always been eager to try out any gadget I could get my hands on. I became a tech journalist so that I could always be around technology and see the newest devices. I use gadgets every day to make my work and life easier. I have enough experience to know If a device is actually improving my activity, offers something useful or new. I will post my honest opinions and judge a device as objectively as I can.
@https://twitter.com/Colin27Anderson
Previous Xiaomi Mi5 specs and features leaked, release coming soon
Next New OnePlus Device Shown by FCC