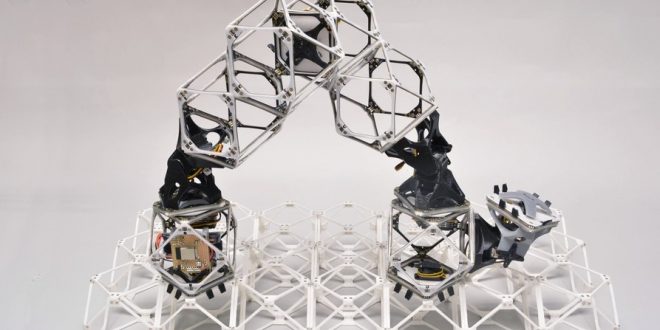 The Center for Bits and Atoms at MIT is working on a challenging effort to create self-assembling robots. Although the team acknowledges that the creation of an autonomous self-building robot is still “years away,” their effort has so far produced promising outcomes.

Voxels, a term taken from computer graphics, are the central component of the system. They convey shared power and data across components. The components move across the grid to complete the robot’s foundational assembly by grabbing and attaching extra voxels.

“Our approach challenges the conventional wisdom that larger constructions require larger machines to build them,” the researchers write in a related paper that was published in Nature. “Our approach could be applied in areas that today either require substantial capital investments for fixed infrastructure or are completely unfeasible.”

The biggest challenge is achieving the right level of intelligence for these systems. The robots must decide, among other things, how and where to build, when to start building a new robot, and how to generally avoid running into one another while doing so.

Neil Gershenfeld, a co-author of the work, says in a release that “you have to build in intelligence when we’re developing these structures.” The concept of structural electronics—creating voxels that transmit force, data, and power—emerged.

Additionally, hardware concerns persist. To keep the voxels together, the team is now working on making stronger connectors.

In the end, there is no doubt about the need for such a system. The team claims that using the robots to choose the best build could reduce the amount of time needed for prototyping. MIT says,

Although there is growing interest in 3-D printed homes, the printing equipment needed today is at least as large as the home being printed. Again, there may be advantages if such structures are instead constructed by swarms of tiny robots. Additionally, the Defense Advanced Research Projects Agency is intrigued by the idea of developing coastal protection structures against erosion and sea level rise.

The U.S. Army Research Laboratory and NASA have both contributed to the project’s funding.

As long-time IT enthusiasts, gamers and gadget fanatics, Mark and I have been working in the industry for a long time and we both have a vast experience in dealing with smartphones, tablets, PC and console hardware and everything tech-related. My list of industry insiders is long-enough to allow me to get insights into what's going on in the technology field and provide my readers with interesting and timely updates. I focus on brief, to-the-point reporting, keeping the "bla bla" to a minimum and making sure my readers get easy access to important information and updates. I mainly specialize in Android-based mobile devices, leaving iOS and Apple devices in Mark's capable hands.
Previous Venmo has revamped its “send money” page and added in-app charitable donations
Next This soft robot that is modeled after manta rays glides through the water