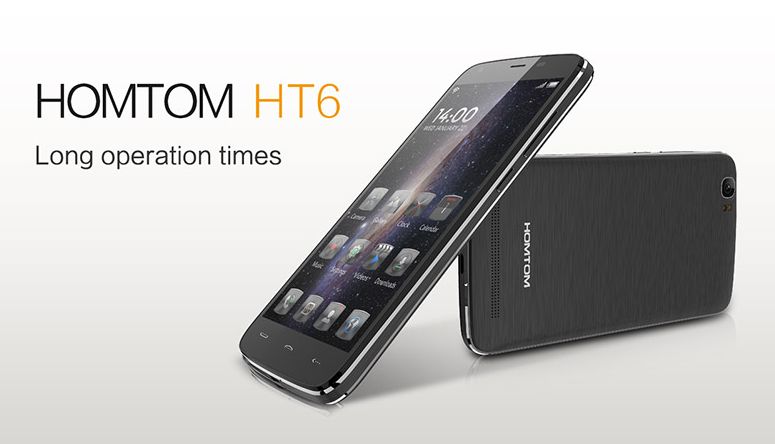 The smartphone industry has for long been struggling with battery life. As phones get smarter, battery life gets shorter and it seems like a smartphone with a weeklong battery life is just a fantasy. It no longer is though, as a Chinese company called HomTom just announced their new smartphone line-up, the HomTom HT6 and HomTom HT5. Both these phones supposedly have a week of battery life, which is incredible in this day and age.

Smartphones like the Galaxy Note 4, Galaxy S6 Edge Plus, Sony Xperia Z3, LG G3 and Moto X have proven their mettle in the battery life department, but none of them can manage to get over the two-day battery life they get with moderate use. Having to charge your smartphone several times a week might come to an end though, as the HT6 and HT5 will definitely become popular.

HomTom’s high-autonomy smartphones are supposed to end up being affordable and powerful at the same time, but hearing about a weeklong battery life is the most interesting part about them. Both the HomTom HT6 and HT5 release dates are set for sometime in October, when the company is planning on putting them up for sale, so we don’t have long to wait to find out whether these phones live up to their promises.

The HomTom HT6 comes with a weeklong battery life thanks to its tablet-sized 6250 mAh battery. According to the company, the weeklong battery life should be valid for average use, while heavy use will see the phone konk out in three days. That’s still better than anything else you can find on the market, so we’re happy to hear that.

The phone itself will hang on to the last 5% of the juice it has left for 65 hours, according to HomTom, which is quite the feat. Presumably, those 65 hours refer to absolutely no use, or maybe in airplane mode, but it’s still impressive. The company also uses MediaTek’s new technology called MediaTek Pump Express, and while the name does sound dubious to say the least, it is the equivalent of Qualcomm’s Quick Charge 3.0, as the phones will be capable of charging to 75% in a mere 30 minutes.

The HomTom HT6 can boast with more than just weeklong battery life, though. It comes with a massive 5.5-inch display with a 1280*720 resolution and Gorilla Glass 3, 4G LTE, 13 MP Sony camera on the rear, 5 MP wide-angle camera on the front, built-in encryption (which is very neat), a MTK6735 processor backed by 2 GB RAM and 16 GB internal storage, dual SIM card slots and Android 5.1 Lollipop. The HT6 is up for pre-order on GearBest, if you’re interested, although we’re not sure what Doogee has to do with anything.

The HomTom HT5 is less impressive, but it still offers a weeklong battery life. It runs on the same processor, but it has only 1 GB RAM, although it keeps the 16 GB internal storage. It comes with a smaller 5-inch display that has the same 1280*720 resolution, protected by Gorilla Glass 3. The camera setup is the same, and Android 5.1 Lollipop is also there, but there’s a smaller, 4250 mAh battery. This one is also available for preorder on GearBest.

As you can see, both these smartphones promise weeklong battery life for the user, which is an enormous improvement compared to the 2-day average that high-end smartphones average with moderate usage. We’re curious to see if these phones truly live up to expectations and we’re waiting to test them ourselves.

Tech Editor with lots of experience with PC hardware components, iOS and Windows-based mobile devices, and love keeping myself up-to-date with any developments in the industry, which I make my job in sharing with you, our readers.
Previous Moto 360 – The best looking smartwach
Next Blackberry Venice – the first BB android phone