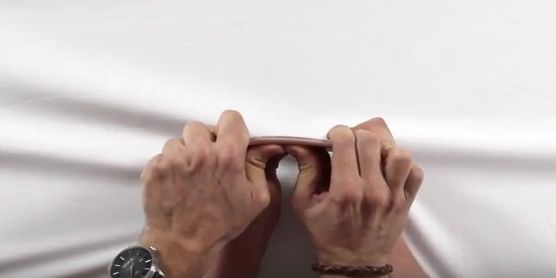 Last year, one of the reasons why the iPhone 6 Plus went viral was bendgate. People seemed to be outraged that the iPhone 6 Plus had a bending issue when kept in pockets of tight hipster jeans, only to find out that a mere 9 people actually saw bendgate happen for real. Nonetheless, it was big enough of a scandal to scare Apple and make the company rethink its strategy. That’s how we came to the iPhone 6S bendgate, which doesn’t seem to exist, thankfully.

Apparently, the iPhone 6S doesn’t bend, it doesn’t even come close to it actually as demonstrated in a bend test on Youtube. After last year’s bendgate fiasco, we were surprised to see that the newly launched iPhone 6S (which is available in stores tarting today) didn’t bend and held on until the very end.

Apple was not going to let bendgate make a return alongside the iPhone 6S, which is why the Cupertino-based company took a different approach in the engineering process. They selected a tougher 7000 series aluminum unibody for the iPhone 6S which would not let the body of the phone be bent. At the same time, they strenghtened the weak points of the smartphone which caused bendgate in the first place: around the volume rockers.

As you can see in the video from FoneFox above, the iPhone 6S Plus has no bendgate issue whatsoever. That should be a relief to those who were worried about ruining their new phones before even getting the chance to using them properly. This time, the iPhone 6S and iPhone 6S Plus won’t bend in your hand like the iPhone 6 Plus did. Although the improvements made the phone thicker, we’re sure the trade-off is worth it.

Tech Editor with lots of experience with PC hardware components, iOS and Windows-based mobile devices, and love keeping myself up-to-date with any developments in the industry, which I make my job in sharing with you, our readers.
Previous BlackBerry Venice aka Priv confirmed amid poor earnings report
Next Nexus 5X – everything you need to know