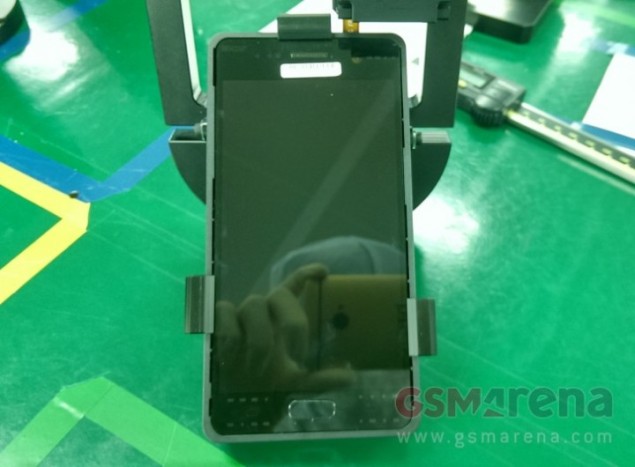 The soon to be released Samsung Galaxy S7 has yet to be revealed in full and rumors on the smartphone have been coming in almost daily. Today, however, something that’s much better than just a rumor has surfaced online, allowing users to speculate more on the smartphone’s design.

A few hours ago the first image of a fully assembled Samsung Galaxy S7 has surfaced online. The image showcases a developer edition of the smartphone so most details cannot be seen, but it’s pretty clear from the new image that Samsung took a slightly different approach from the S6 and S6 Edge design. You can check out the image right below, courtesy of GSM Arena.

As mentioned above, there’s very little we know for sure about the Samsung Galaxy S7. A few days ago the smartphone’s specifications have become available on the popular benchmark app AntuTu, revealing that the smartphone will come with a 5.1 inch display with 2560 x 1440 resolution, 4GB RAM, 64GB of on-board storage, a 12MP primary camera and a 5MP front camera. The device is also going to released in two different variants, one powered by the Snapdragon 820 chip and the other by the Exynos SoC variant, which is going to be released outside the U.S. The new smartphone is apparently going to run on Android 6.0 Marshmallow OS with the Adreno 530 GPU.

The Samsung Galaxy S7 will be released on a yet to be confirmed 2016 release date. We’ll let you know more about the upcoming device as soon as possible so stay tuned for more.

I'm very curious when it comes to technology. I enjoy tinkering with entertainment and communication gadgets.
Previous iPad Pro Gets More Powerful Office Apps
Next Sony Interactive Will Place Bigger Emphasis On The PlayStation VR