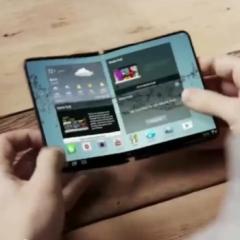 Rumors regarding a foldable Samsung smartphone started surfacing more than a year ago. We first reported on the matter back in 2015, when everyone thought that the South Korean company will launch the gadget in 2016. 2016 came and passed, and nothing happened. Now, according to Korean site ET News, it seems we will finally see this product. The aforementioned source stated that Samsung Electronics and Samsung Display are currently wrapping up the project. This means that we are really close to seeing it become reality. Even though the South Korean tech giant will probably unveil the foldable smartphone before the end of this year, it’s quite unlikely that it will go into mass production in 2017.

In order to assess the quality of the new device, Samsung is going to manufacture thousands of prototypes. These will be given to partners and major customers for testing. If everything goes according to plans, the company will start the mass production of the smartphone. This will likely happen sometime in 2018. According to the aforementioned source, Samsung already showed off the foldable smartphone to select partners during the MWC 2017. Unfortunately, the number of participants who had access to this item is really low, and they managed to keep the features of the smartphone a secret.

Thankfully, we know a little bit about the device due to the patent application the company filed last year. According to the sketches that surfaced in November 2016, the new smartphone will bend at the middle of the screen. This way, when the smartphone unfolds, it looks just like any other similar device. When it folds, it is a lot smaller and easier to handle. Of course, Samsung can go two ways with this feature. It can deliver a device that has the size of a regular smartphone when folded, or it can be half the size of the smartphones we now know. Basically, due to its foldability, the new handset can be twice as big as a regular smartphone.

Of course, smartphones are already quite large. However, a bigger screen is always welcome, especially by those who need to occasionally complete urgent office work on them. On the other hand, a regular size screen that easily fits in a pocket when folded is also a great thing. It really depends on the tech giant how it will use this feature. Either way, a foldable smartphone is truly an innovative gadget. It’s almost certain that even though Samsung will be the first to deliver it, it won’t remain the only one to launch a device of this kind. Other tech companies are already working on developing similar handsets.

I am passionate about gadgets and everything tech related.
Previous iPhone 8 Will Feature a Larger Battery and Increased Battery Life
Next Montblanc Summit is the Company’s First Luxury Smartwatch