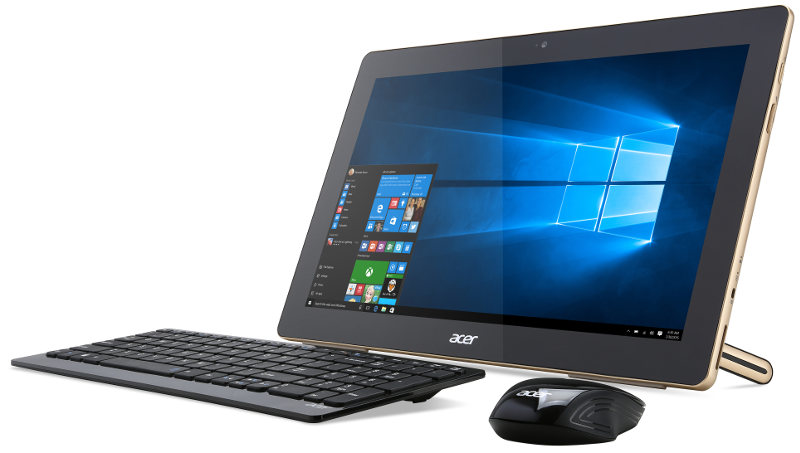 Today, Acer introduced two new devices at a press conference in Taipei. The Aspire R14 convertible and the new all- in- one, dubbed Aspire Z3- 700. Both devices promise to be great but we decided to take a look at the Aspire Z3- 700. With the Aspire Z3-700 Acer might have reinvented the all- in- one concept. How? They made it portable also. Although we can’t imagine someone carrying a 17.3- inch device all day, every day, the Acer Aspire Z3- 700 still is a clever device that will allow users to make the most of it.

The Aspire Z3- 700 all- in- one is actually a tablet that rests on two kickstand arms. When used with peripherals, such as a mouse and a keyboard, it is a desktop PC. But users can also add the battery it comes with, and then it becomes a portable device. The Aspire Z3- 700 has a 17.3- inches screen. With its 1920 x 1080 pixels resolution it offers full HD image quality. It is also a multi- touch capacitive screen that works both with your fingers and a stylus. The display of the Aspire Z3- 700 is bright and delivers vibrant colors, so there is no problem in the image section to be reported so far.

The Acer Aspire Z3- 700 comes in several variants, some powered by Intel Pentium N3700  processors, others by Intel Celeron N3150 or 3050 processors. The Aspire Z3- 700 will support up to 8GB of DDR3L system memory, depending on the version you choose. It offers both SSD and HDD storage options, so users can configure their devices as they like. The SSD versions will be able to offer 32 GB to 256 GB of storage, while the HDD version will be available with 500 GB storage. The included battery is promised to deliver up to 5 hours of battery life, although we can’t take that for granted before testing it. Anyway, it is great that Acer thought of equipping its new all- in- one with a battery so users will be able to move around with the Aspire Z3- 700.

As far as the ports go, the Acer Aspire Z3 includes two USB 3.0 ports, alongside an HDMI port and a microSD card slot. This latter feature will probably be welcome by those who opt for smaller storage devices. Thanks to the microSD card slot, they will be able to extend their devices’ storage. The Aspire Z3- 700 runs on Windows 10.

Regarding the price of the Acer Aspire Z3- 700 for now we only know that it will start from €599. US prices were not revealed so far. It seems that the Aspire Z3- 700 will be available by the end of the year in Europe.

I have always been eager to try out any gadget I could get my hands on. I became a tech journalist so that I could always be around technology and see the newest devices. I use gadgets every day to make my work and life easier. I have enough experience to know If a device is actually improving my activity, offers something useful or new. I will post my honest opinions and judge a device as objectively as I can.
@https://twitter.com/Colin27Anderson
Previous Google Glass and HoloLens to be competing products next year
Next Austria announces “hallo App Deutsch” language app