Steam controller – the bridge between a controller and a keyboard+mouse

Slowly Valve entered the hardware scene, two years after the announcement of the Steam OS. Around that time Valve gave us a glimpse of the Steam Controller, a piece of hardware that split gamers into two camps, those who see it’s purpose and are anxious to use it and those who think it’s redundant and will not be useful. The controller will integrate with Valve’s gaming system, the Steam OS, Steam Machine and Steam Link.

The controller was created to fuse together the advantages of the two gaming camps, PC and console, by giving gamers the precision of a mouse with the mobility of a console. A console has the advantage that it can be set to any TV and the player can sit comfortably on the sofa, bed or chair. But while the console scores points in comfort, it’s controllers lack precision and dexterity while aiming or controlling the cursor. On the other side, playing a game on a PC offers more accuracy and dexterity, but the user is constrained to sitting at a desk. 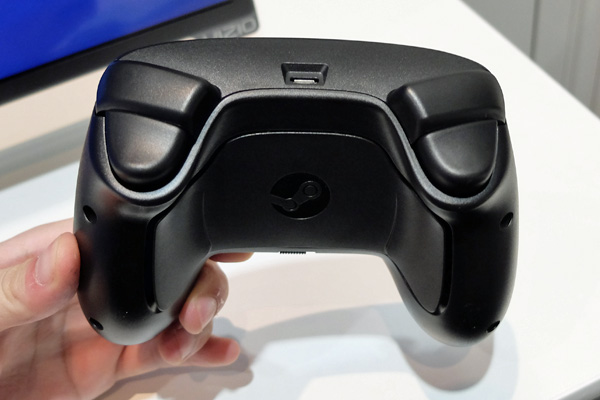 The main attractions are the two trackpads on the front the device that pulse when the thumb moves on them and lets the user know how close the thumb is to the edge. Overall the design is a bit hard on the eyes, the two big trackpads may be practical, but give the Steam Controller a less than elegant look. The grips are bigger than what we see on controllers from PS or Xbox and reaching the analog stick or the four front buttons seems to be a stretch. In total, the controller has 13 buttons, 7 on the front and 6 on the rear.

On the left side, we have an analogue stick and a haptic touchpad. The touchpad has an etched “+” on it, looking similar to the traditional D-pad that controls movement. It’s made of plastic, just like the rest of this device, but has a matte finish that is pleasing to the touch. The analogue stick has a very well balanced stiffness, offering a very precise movement with little effort from the thumb. To give it more grip, the top of the stick is covered in rough rubber, similar to the Xbox’s sticks.

The front right side of the controller holds the familiar A,B,X,Y buttons is their known colors and another trackpad. The trackpad is made from the same material as the one on the left side and has the same finish. The right side trackpad has no model etched in it and is used for looking around, controlling the camera or acting like a mouse pointer. Between the two trackpads, there are 3 buttons, the Steam button, star and the back button.

The bumpers and analogue triggers sit at the front of the controller, just like we have been used to from other devices, a novelty is the two stage triggers. The travel distance is not as great as on other devices, but it give a nice “click” to let you know that it’s a the maximum point. The bottom houses two pedals that can be used as buttons, but because of the position in the hand, the player might press them accidentally when gripping the controller too firmly.

When writing, the virtual keyboard is split in two and each trackpad controls a pointer on its respective side and when hovering over the desired letter the user presses the trigger to choose it. It’s not the most comfortable way to write, but it is a lot better than scrolling through the alphabet, one letter at a time with the analogue stick until you reach the letters you want.

In my opinion, this device does a good job and is a platform that will evolve continuously. It’s not perfect yet, but using a trackpad greatly increases accuracy when controlling a character and closer to what a mouse offers than anything I’ve seen so far.

I have always been eager to try out any gadget I could get my hands on. I became a tech journalist so that I could always be around technology and see the newest devices. I use gadgets every day to make my work and life easier. I have enough experience to know If a device is actually improving my activity, offers something useful or new. I will post my honest opinions and judge a device as objectively as I can.
@https://twitter.com/Colin27Anderson
Previous The iPad Pro is finally here! Short presentation and price tag.
Next Xbox One to receive Windows 10 update starting 3 AM ET